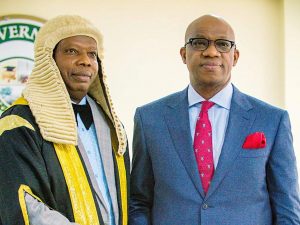 The Ogun State House of Assembly on Thursday, February 20, called for compulsory insurance scheme and standard rules of engagement for members of the Amotekun Corps upon its establishment.

The Speaker of the state House of Assembly, Olakunle Oluomo, stated this while presiding over the plenary.

The Assembly, which debated on the bill titled ‘HB.NO 035/OG/2020- A Bill For a Law to Establish the Ogun State Security Network Agency and Amotekun Corps’, said the bill would assist in maintaining law and order in the state.

While lauding his fellow lawmakers for their meaningful contributions to the debate on the bill, Oluomo pointed out the need for a pension scheme for members of the corps.

The bill scaled second reading as the lawmakers were in support of it.

In their various contributions to the bill which scaled second reading on Thursday, the lawmakers explained that the law was targeted at devising a community policing scheme to complement and collaborate with existing security agencies to reduce crimes and criminalities to the barest minimum in the state, the South-West region and the nation at large.