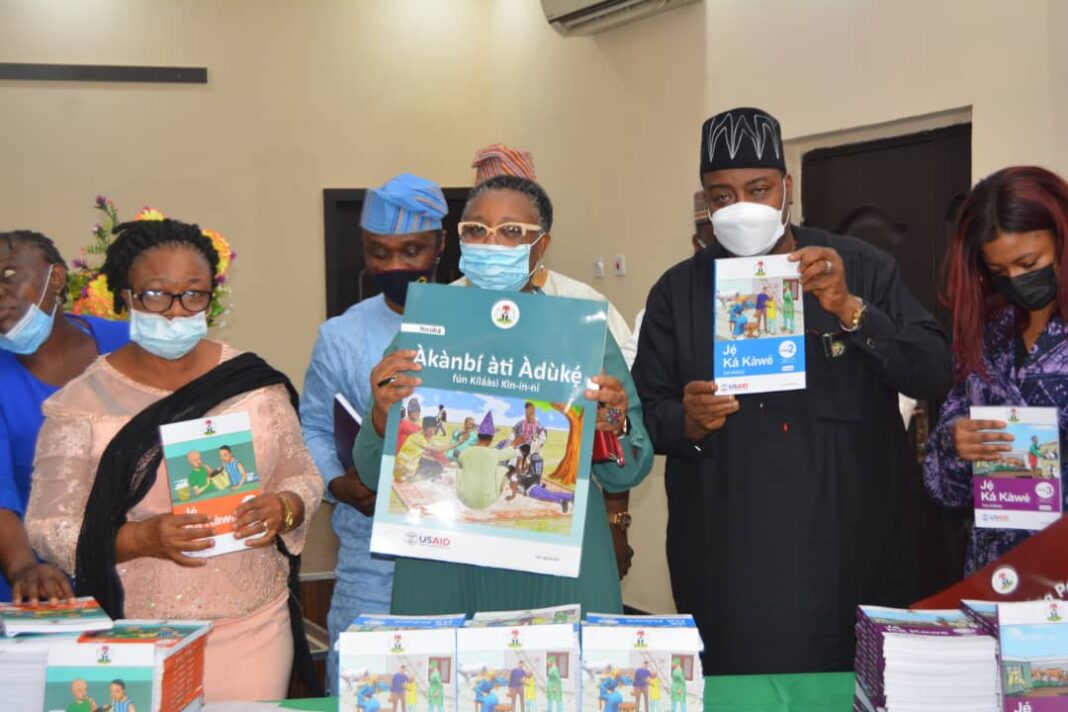 The ‘Je K’a Ka’we’ (Let’s Read) project, was developed based on the Yoruba language curriculum, to promote literacy through the use of indigenous languages amongst pupils in primary 1-3 to engender positive learning outcomes. The learning and reading books are structured on phonemic awareness, alphabetic principles, vocabulary, comprehension and writing.

Noting that the use of the indigenous learning materials in schools will not only increase literacy levels in pupils, but also enlighten them on our vibrant Yoruba culture, Alawiye-King assured that the resources will be used to complement the existing teaching and learning of Yoruba language in schools.

He added, “The infusion of local languages into our educational system will help pupils succeed academically.” Lagos State Commissioner for Education, Mrs Folashade Adefisayo, commended USAID for the initiative and for also promoting the mother tongue that is gradually going into extinction.

She advised parents to encourage their wards to speak their local languages, particularly the Yoruba language, for it will make them unique in any part of the world.

The representative of the honourable Minister of Education, Mrs. Chinyere Nwokorie, noted that the book is premised on the language provision in the National Policy on Education, which encouraged the use of mother tongue as a medium of instruction at the lower primary level.

Giving an overview of ‘Je K’a Ka’we’ at the event, Professor Solomon Olanrewaju Makinde, of the Faculty of Education, Lateef Jakande University, said that the book was developed to provide pre-reading and pre- writing lessons.

He explained that the materials consists of pupils’ books and teachers’ guides, adding that teachers do not need to write lesson plans to teach any lesson.

Chief of Party, USAID/Northern Education Initiative Plus, Mr Nurudeen Lawal, said that the book is aimed at helping children develop critical thinking and literacy skills; even as he expressed that the shrinking usage of Yoruba language is declining the pockets of culture in our society, adding that teaching in mother tongue will help the children transfer knowledge to other subjects for better understanding and also promote life-long learning.

Other speakers at the event, which included the Permanent Secretary, Lagos State Ministry of Education, Mrs. Abosede Adelaja; the state NUT Chairman and other stakeholders also commended the initiative.