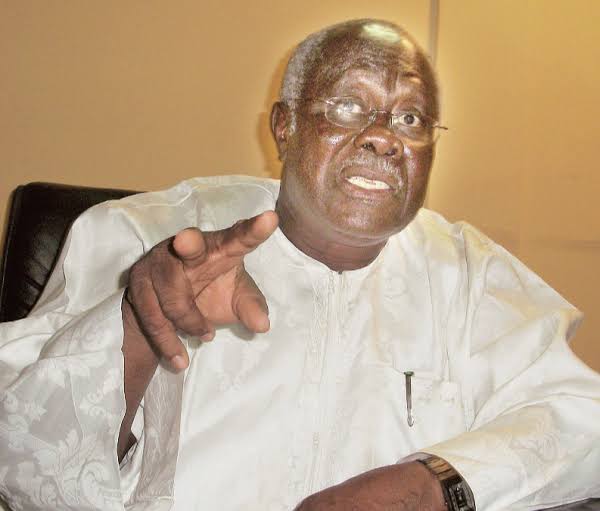 Facebook
Twitter
Pinterest
WhatsApp
Email
Former National Chairman, South, of the opposition Peoples Democratic Party, PDP, and Atona Oodua of Yorubaland, Chief Olabode George, has warned that the continued shutdown of Lagos State is a panacea to looming anarchy.
In a statement he oersonally signed and made available to the media, the former military governor of old Ondo State, said the shutdown of Lagos State, the commercial nerve centre of the West African subregion is already breeding a new kind of virus, Hunger Virus, which is nondoubt deadlier than COVID-19, for which the state is locked down by the Federal Government to contain its spread.
While acknowledging that Nigeria, and by extension Lagos State is not immunes to the ravaging COVID-19, which he said is “presently ravaging the world like a monstrous invisible enemy, and distorted virtually every corner of the globe with enormous mountains of deaths, George believed that it is practically impractisable to “lockdown down millions of people without necessary palliatives to ease the dysfunction which this scourge has inflicted upon our country.”
He appreciated the need for the Federal Government’s action in the shutdown of Lagos, especially as, being the commercial hub of West Africa, and appears to be the very hot zone of the pandemic, which is to ensure safety, prevent communal soread of the virus and banish the acourge from our shores, he however argued that “both the state and the federal organs have not provided effective ameliorative measures to cushion the effect of the shutdown,” adding, “In a largely informal economy, where most of our people depend on daily wages, the burden of lack an income is devastating.”
Reiterating that Lagos is totally locked down, with markets, banking halls, local grocery shops, supermarkets, transportation services, among others put in abeyance, by the directives of the Federal Government since March 25, the elder statesman argued that this has led to “a natural growing anger in Lagos, as the most vulnerable are ravaged with hunger.”
He added, “Our youths are getting restless, pushed onto the streets because they are famished. Others have strayed into sheer banditry, terrorizing homes, breaking into shops and robbing people.
“And yet others have resorted to putting all kinds of sinister audio messages in the social media threatening rapine and murder. Surely, we cannot continue like this.”
To ameliorate the pathetic situation, George, however, suggested ways out of the impasse, advocating that the state must be gradually eased out the lockdown with comprehensive safety measures.
He said, “There is a need for the expansion of the testing centers to ensure that the virus is appropriately contained, especially among the asymptomatic population, who may spread the virus without knowing that they are infected.
“Governments at both state and local levels should purchase more Personal Protection Equipment, ensure more rapid testing kits and make social distancing mandatory.”
Warning that the elongation of the shut down may bring more chaos and destruction, far worse than COVID-19 itself, the Atona Oodua advocated for the application of local responses, engendered by good governance and salvaging leadership, to containing the pandemic.
He also warned against copying global shutdown without contemplation, even as he contended that Ghana, Dubai, Brazil, and many other countries are already lifting the shutdown barrier, advising that government shoukd do same too, “with appropriate safety guidelines.”
He therefore called on government to open up essential services and step up safety measures to enable the populace return to some semblance of normalcy, saying, “Enough of the shutdown.”