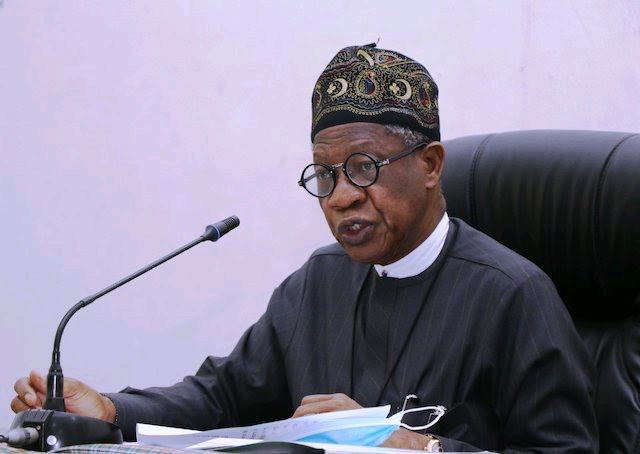 …Accused Of Not Knowing Name Of His LG.

Major stakeholders and chieftains of the All Progressives Congress, APC, in Irepodun Local Government Area of Kwara State have expressed their displeasure with the Information and Culture Minister, Alhaji Lai Mohammed, over the controversy trailing the ongoing APC Membership Registration/Revalidation exercise.
The minister, who hails from Oro in the local government drew the ire of his kinsmen over his calling for the cancellation of the exercise immediately he participated in it on Monday.

Worse still, the stakeholders, made up of all elected and public office holders from the area expressed disappointment in Alhaji Mohammed, who in his prepared speech calling for the cancellation of the exercise did not know the name of his local government.

He had allegedly said that his Local Governemnt Area was Ifelodun as against Irepodun in his press statement.

They also frowned at his coming home late to participate in the exercise, where he was expected to be part of its flag-off over a week earlier and above all, his allegedly use of “his homestead to stage a disinformation against the exercise.”

They had said, “Barely a week after the APC registration exercise began, the honourable Minister of Information and Culture, Alhaji Mohammed majestically found time to join the exercise at home.

“The honourable minister registered registered at his polling booth in Oro and thereafter used the homestead to begin a disinformation campaign against the exercise.”

Also, the minister’s kinsmen added, “The stakeholders in Irepodun completely disassociate ourselves and our local government from the minister’s wild claims.”

Arguing that the registration that took place in Irepodun Local Government was going on smoothly with official documents – registration forms and registers – used properly and the guidelines painstakingly followed before Alhaji Mohammed came only to condemn the exercise, the stakeholders, in a statement signed by no fewer than 12 people said, “If the honourable minister consulted and respected his associates, including Ambassador Niyi Abioye, and foot soldiers, who registered without any problem and even displayed their slips on social media, he would not be putting up this utterly reckless campaign.

“In Oro Wards 1 and 2, the immediate constituency of the honourable minister, the exercise took place smoothly with huge turn out and registration of members.

“Irepodun was duly represented at the APC Stakeholders meeting on the registration exercise at the Government Banquet Hall, Ilorin, two weeks ago.

“It is disappointing that the honourable minister is hiding under a nebulous tendencies creation to spread disinformation.

“In conclusion, Irepodun Local Government stakeholders disassociate ourselves from the disinformation being spread by the honourable Minister of Information and Culture, Alhaji Mohammed on the ongoing registration exercise.

The honourable minister had called for an outright cancellation of the APC registration exercise in Kwara State, while addressing the press after he finished registering at his country home in Oro, heaping blames on the APC Registration Committeer and the state governor, AbdulRahman AbdulRazaq