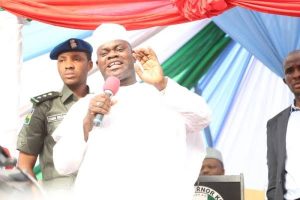 The governor of Kogi State, Alhaji Yahya Bello, was on Monday, January 27, sworn-in for a second term in office, just as he named 15 commissioner-designates.

Governor Bello was sworn in by the state Chief Judge, Justice Nasiru Ajanah, at the Lugard House, for the first time in the history of the state.

The governor, at his inauguration, announced that the commissioner designates should be screen on Tuesday by the state House of Assembly, while their swearing-in would take place on Wednesday at Government House Lokoja.

In his inauguration speech, Governor Bello called on all and sundry, friends and perceived foes, to put aside all political, ideology and affilliation differences and join him to give the state the very best of governance.

Stressing that his Next Level in Kogi State will rely on synergy at every stage, primarily between the people and the government, with a wide array of domestic and international investors, service providers and development partners spread across the public and private sectors, Bello said, “By the grace of God, the oath of office I have just taken is a pact to do right by all citizens as the fourth Executive Governor of Kogi State.

“In this second and concluding term of my constitutional tenures as governor, it shall be the principal preoccupation of my administration to bring revitalised energy to bear in delivering refocused governance.”

The governor stressed that the overall mission of his second term in office is the development of Kogi State into the nation’s foremost and most secured emerging commercial hub, through optimisation of the state’s geographical location, natural endowments and human resources for a sustainable future.

Noting that he ran for second term with the slogan, ‘Let’s Do More’, by showing his achievements in his first term, with a promise to improve on them, the governor added, ”Kogi voters have reelected us with the most historic margin in a gubernatorial election ever seen in this state and it is now incident on us to keep our electoral promises and we shall do just that.

“We shall embark on large scale urban renewal projects to further transform Lokoja into a resilient capital city with modern utilities, attractive to residents and tourists alike. Even though upgrading the sights and sounds of Lokoja will be paramount, this beautification project will extend to at least one major town in each senatorial district.

“We will sustain focus on agriculture for improved food security, mass employment and increase in internally generated revenue. We will take the Agricultural Revolution which we started in the first term to the Next Level.”

Governor Bello also promised to build the nation’s largest ethanol plant in Kogi State for the production of ethanol fuel from cassava, with the hope that this will further expand the use of green fuels in Nigeria.

Apart from investment in agriculture, Governor Bello disclose that his administration will also pay greater attention to human capital development by investing more in training of the people for enhanced relevance in a technologically evolving future.

He said, “With information and Communications Technology becoming such a big earner for individuals and societies, we will do our best to facilitate some youths with the relevant cognate and competencies to acquire further education in this area at leading institutions abroad

“My primary allegiance as governor will remain to Kogi State and her citizens, not to party or tribe. Everyone is my citizen and I owe everyone the protections and fidelities inherent in the office.”