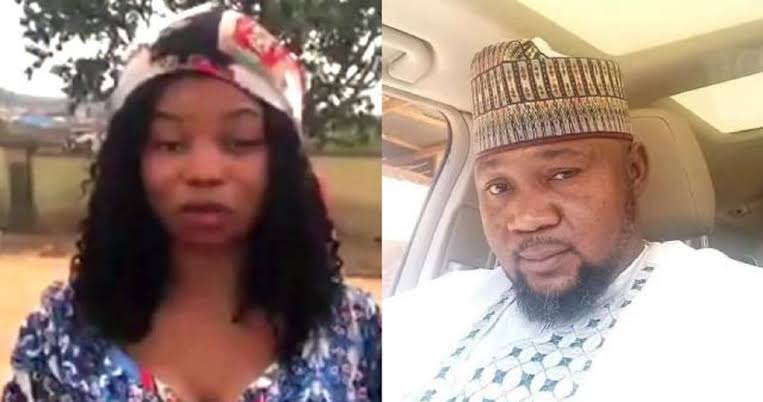 A beauty queen, Elizabeth Oyenibi, has narrated how Kogi State Commissioner for Watwr Reaources, Abdulmumini Danga, alkegedly abducted, flogged and raped her, in a trending video clip posted on Facebook, just because she made a post callibg on him to assist his sister, because charity, as they say, begins at home.

Oyenibi had in rhe Facebook post advised Danga to help his sister and immediate family, saying, “Honourable Commissioner, Abdulmumuni Danga, your Kiddos D C Adoke Leash needs your help, you are in a right position to help, especially members of your family charity begins at home.”

According to Oyenibi, the post, however landed her in big trouble, as according to her, “On 29 March, the commissioner was shown my post and he ordered some boys to pick me up and they took me and his sister from Okene to Lokoja (70 kilometre) and the commissioner personally flogged us.

“He tore my clothes and made a naked video of me, which he threatened to circulate and he kept me in his Lokoja house, asking me to make another post apologising and countering my first post, where I told him to assist his sister with the reference ‘charity begins at home’.

“He did not release me on that day, but kept me in his house. In the night, he made sexual advances at me. And I allowed him to have sex with me, because of fear and anxiety.

“He only took me back to Okene the second day because they have assignment in Okene.”

Meanwhile, the Kogi State governor, Yahaya Bello, has ordered an accelerated indepth investigation into the allegations against Danga.

Making the governor’s intention known was the state Commissioner for Information and Communication, Kingsley Fanwo, who said in a statement made available to the media that Governor Bello was shocked on hearing the news and subsequently ordered a full-scale investigation into the matter.

Fanwo said that the governor has assured both the accuser and the acvused, as well as the general public that the whole truth would be uncovered and justice served as appropriate.

He said, “The attention of the Kogi State government has been drawn to the allegations of assault, battery and other serious crimes levied against Abdumumini Danga, who is a serving commissioner in Kogi State.

“It is alleged that he is involved in the alleged abduction and assault of a woman which allegedly occurred in Lokoja recently.

“His Excellency, Governor Yahaya Bello of Kogi State, who is an avowed advocate of the fundamental rights of Nigerian citizens, and especially within the boundaries of our dear state, is shocked by these accusations.”

Expressing disgust at Danga’s misconduct, a non governmental organisation, Women Rights Organisations, WRO, led by Dorothy Njemanze, in a statement appreciated Governor Bello for promptly responding to the pictures and videos of the assault, called for the immediate auaoenaion of Danga, who it said was also accused by another woman of aimilar treatment in Kogi few days before Oyenibi’s ordeal.

Speaking in Abuja, Njemanze of Dorothy Njemanze Foundation, with support from Action Aid Nigeria and Global Affairs Canada said, “We are dismayed by the recent news of alleged physical and psychological violence perpetrated by the Kogi State Commissioner for Water Resources, Abdulmumuni Danga, against Elizabeth for criticizing him on social media.

“This is especially appalling, because the accused commissioner allegedly abducted her, physically assaulted her, stripped her naked and took a video recording of her with the threat that the video would be released if she speaks about the incident. As if that was not enough, her phone was destroyed to avoid documentation of evidence, and she was forced to retract her statement and apologize under duress. This is the height of abuse of power and outright violation of rights.

“If left unaddressed, such heinous act by power holders against women will increase, thereby leaving women and girls more vulnerable than ever. We are sure that His Excellency, Governor Yahaya Bello, is against the abuse of power in office, and as an ardent advocate of the fundamental rights of Nigerian citizens, he will thus not allow this matter be swept under the carpet.

“The lady in question has had to flee for her life and deserves protection pending the outcome of investigations. She and her family are being threatened, they have been receiving incessant threatening calls. She is also currently undergoing medical procedures because of the extent of her injuries.”

Njemanze underscored the importance of bringing to the attention of the governor and the genetal public “that the same Mr. Danga has also been accused of assaulting another woman and her children, a week before this current incident is alleged to have taken place, tearing her clothes, spraying pepper spray on her and her kids. This situation cannot go unaddressed.”