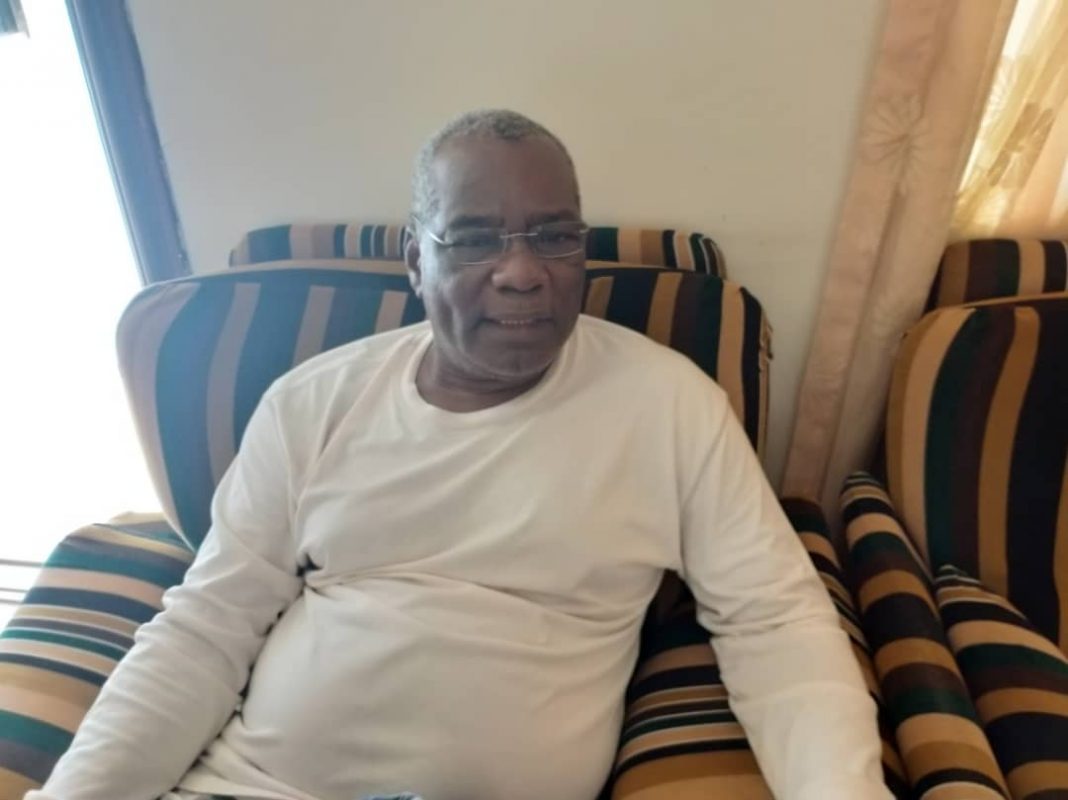 Mike Mku was the Senior Special Assistant to former President Olusegun Obasanjo on Human Trafficking and Child Labour. He was also the General Manager, Commercial in the defunct Benue Cement Company, BCC, Gboko.  In this exclusive interview with Benjamin Awua, Mku speaks on the gains and failures of the Peoples Democratic Party, PDP, as well as the insecurity and budget deficit in Nigeria. Excerpts:

Well, I feel great, I feel good and okay. I thank God, because am still physically and mentally strong. At 69, I have seen a lot of things in this country and in my community, as well. I feel okay; I feel just good.

How has your journey in life; your trajectory in life been?

My journey started 69 years ago, I was born in a village, in Yandev, Gboko Local Government Area of Benue State.
I went to primary school in Gboko, later Saint Michael Secondary School, Aliade, which was one of the frontline secondary schools in Northern Nigeria at the time, together with other schools like Government Secondary School, Kastina Ala and Keffi. Saint Michael Secondary School was one of the very renowned secondary schools in Nigeria. Anybody who was in Saint Michael was seen to have intellectual ability, discipline and values. It was a Catholic school and the missionaries actually build some specific values in us.
Some of us have grown up with those values and we uphold them until today. The school produced the likes of retired John Cardinal Onaiyekan, who set a record in Northern Nigeria at the time.
The schools were in a competitive examination of entry into the University and Onaiyekan came first in the whole of the Northern region; we were told in school that the late Premier Ahmadu Bello came all the way from Kaduna to know the school were such a student came from.
So that’s the school I went to. From there I went to the Ahmadu Bello University, ABU, graduated in the 70s and from there I went for the National Youth Service Corps in Ibadan, Oyo State.
After the NYSC, I eventually got employed by a publishing company called Spectrum Books, from there I left and came down to Benue to work with the state government establishment, Benue Educational Supply Company, BESCO, which was established by former governor of the state, late Aper Aku.
I was there for about a year and eventually got elected into the Benue State House of Assembly in 1983 under the platform of the National Party of Nigeria, NPN. We were in the Assembly for three months when the Army struck and took over the government.
I went back to school to do some postgraduate studies and eventually joined Benue cmmement company, BCC, where I spent about eleven years and retired in 1998 to contest to be governor of Benue state. I lost out; tried again in 2003 I also lost out and in 2007, 2011, 2015 and 2019 all tried to go to the senate without success. So that is it and that’s were I stand.

What is your assessment of Nigeria after 21 years in terms of gains, failures and opportunities?

Nigeria in the last 21 of democracy is neithe a total failure nor is it successes all the way. There are problems along the line, but starting from 1999 when Olusegun Obasanjo was elected President of Nigeria, from my own perspective I think Obasanjo is one of the very well meaning presidents of this country, because I happen to work with him as his Special Assistant on human trafficking and child labour,  and I knew where he had his mind and where he was steering his government to go. Indeed from my own perspective and from my own analysis and judgment, I think he did well to some extent. Although there were potholes here and there, but overall he did well giving the circumstances in Nigeria. I can tell you without missing words that Nigeria is a very difficult country in so many ways, because we are not well meaning. First of all we don’t like ourselves, we keep complaining; I know of some people coming to government with brighter ideas and good intentions but the people just mess them up and that’s the kind of thing we have been seeing in this country. After Obasanjo, Musa Yar’Adua came in and I think he meant well too and he started well too, unfortunately sickness could not let him go and he eventually lost his life. Goodluck Jonathan came, he also tried. The only problem Jonathan had was his ambition to become president for the second time which to me caused a whole lot of problems because that was against the zoning arrangement of the People’s Democratic Party, PDP, at the time. Because of his ambition to become the president for the second, time all the gains PDP had made, he squandered; he opened up government coffers within one year of campaign and people embezzled all the gains he made with the previous governments. He did quite some work in agriculture through the former minister, Adesina. They were a lot of innovations and what have you. These things would have stood as achievements, but because of what happened attat tail end of his administration all those things were overlooked and nobody now look at him as somebody who did something for the country of course he did but he eventually destroyed it by the way he wanted to be president for the second time. All sort of people came in with their selfish ideas which was virtually to loot and be relevant. That was what destroyed his administration otherwise  he also did well. So overall, the PDP administration did quite some work.

Are you pleased with the Muhammadu Buhari’s administration, most especially his disposition to security?

I don’t want to talk about the administration of Muhammadu Buhari. To say I am disappointed is an understatement, because I looked at Buhari as one of the icons of this country but the performance now does not justify my earlier thoughts. I contested elections in 2015, I was the senatorial candidate of the PDP in Benue North-West senatorial district, I lost the election; but I was consoled by the fact that somebody whom I trust and believe in will  run this country had won the election and that was Buhari. So I didn’t feel too bad that I lost the election. Of course I felt bad because I invested in it and I also had my own dreams of what I  will do in the Senate. But overall, I believed that he will build a Nigerian that we shall be proud of, at last I was mistaken, because what I have seen in the past five years that he has been in charge is incredible. I have never seen such a thing. This is a government that Buhari is completely unable to control, ridiculous things happen even in his party and I don’t see him taking charge. The Economic and Financial Crimes Commission, EFCC, is fighting the DSS; the All Progressives Congress, APC itself is andengroased in in-fighting and I don’t see his hand in trying to resolve this issues; that is a part from abysmal performance of other sectors of the economy. Yes as a person, we regard him as somebody who is not corrupt but it doesn’t stop at that. If you’re not corrupt other people around you must not be corrupt as well. So if he parades himself as somebody who is not corrupt and his government is corrupt it does not make sense.

You have contested and lost so many elections,  what do you think is your biggest political mistake?

I won’t say it is about political mistake, because when I contested to be governor of Benue State in 1999, I didn’t lose it but I didn’t get it for circumstances that Benue people know very well. I eventually served under President Obasanjo as his Special Assistant, I later resigned and contested in another party to be governor again. He actually didn’t like that but I insisted and left, I think if you call it a mistake I would have said that is the mistake I made; I shouldn’t have left him because I was in a vital position to make a contribution to the government of the country under him,  because under him I was the one responsible for the establishment of the agency against trafficking. I sponsored the bill with Mrs. Titi Atiku who had an NGO, it was passed by the National Assembly and signed into law by the President and the agency was established. I think that is one of the things I succeeded in doing working with him and I believe I would have done more if I had continued to work with him. So if you talk about mistake I think that was the only mistake I made because I would have done much better and would have gone much high in politics.

Are you comfortable the way Nigerian government is engaging in foreign debts?

Absolutely not, because the large part of the budget is dedicated to servicing of foreign debts. A lot of this external debts are not dedicated to specific projects that will improve the life of Nigerians. The level of borrowing and debts we are carrying out in this country is so detrimental to the life of our children, they will live their lives by paying  and paying debts that is the implication of it. Rather than engaging in internal production to up our economy and use the funds for development we have just kept on borrowing and borrowing. I am not an economist but simple intelligence will tell you that over borrowing is not correct.

There is high level of insecurity in the country ranging from Kidnapping, banditry, Boko Haram to herdsmen attacks. Are you satisfy with the way the government is handling it?

Insecurity is one of the things I have against this administration, because when Buhari came in we all expected that as a general he must have the wherewithal to stop the high level of insecurity and indeed when he was campaigning,  that was one of the things he used to convince people that as a general he knows about war even though not a conventional war we expected that he should be able to stop this. Till today killings are still going on in the country. In fact, apart from the Boko haram they met on ground, so many other killings came up, Kidnapping is at it highest level with the other new one the bandits and then the Fulani herdsmen stuff all over the country. So the issue of insecurity in the country has really worsen.

Do you see the establishment of regional security outfits as an option to stop the killings ?

When you have a problem that is disturbing you,  you use all kinds of ways to address the problems that you have and so if people believe that the establishment of regional security outfits is the way out there is no harm in trying them, if you try and it doesn’t work automatically everybody will know and the people will try another option. For now I think that is what is on the frontline so I support it.

Recently President Muhamadu Buhari signed the executive order 10 giving room for the state legislature and the judiciary to have their own autonomy, do you support the signing ?