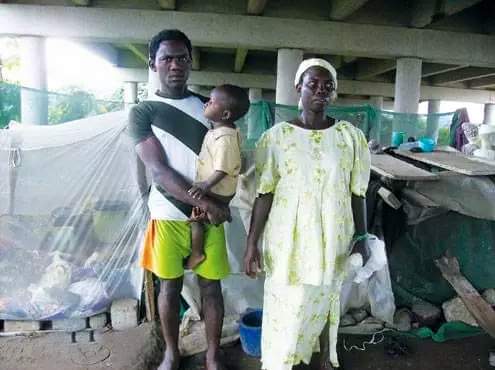 A jobless man, simply identified as Monday, has been living under a bridge at Cele area of Lagos, where he is raising his family, for rhe past two years, because he has no money to rent an apartment.

This development followed the eviction of Monday and his family and the subsequent demolition of their home, which now prompted Monday and his wife, Dupe, and their son, to now turn under the bridge at Cele on Oshodi – Mile 2 expressway, Lagos State to home.

Sharing their under bridge abode with dangerous reptiles, such as snakes and cats that disturb them at night, the couple has been living there for the past two years after they were evicted from their home at Itire area, hardly being able to feed talk less of raising money to rent decent apartment to live in.

Monday had cleared a section under the bridge and made a makeshift room and parlour apartment, using mosquito net.

In all the sufferings however, in spite of the pains and attendant challenges of sharing their under the bridge abode with snakes and cats, Dupe declared that under no circumstance would she abandon abandon Monday, because she loved and married him seven years ago when things were rosy for them.

She revealed that it was Monday, her husband, who raised the N200 with which she uses to buy and sell ‘pure’ water; where she makes profit of between N300 to N600 daily, which is barely enough to feed the family, since her husband is jobless, because he could not find work to do.

Revealing that she was under intense pressure from her family to dump her husband, because of his condition, Dupe said that she refused, insisting that marriage is for better and for worse; hinging her hopes on God Almighty, who she hopes will remember her and her husband someday and bring about a turn around for good to their situation.