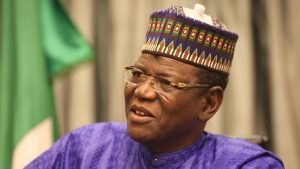 A prosecution witness, who is also an operative of the Economic and Financial Crimes Commission, EFCC, Michael Wetkas, on Thursday, February 20, furnished the court with more details of how the former governor of Jigawa State, Sule Lamido, allegedly diverted funds meant for projects in the state to his private use through a company, Dantata and Sawoe Construction Company.

At the resumed trial on Thursday, Wetkas told the court that EFCC’s investigation revealed how Lamido’s companies: Speeds International Limited and Bamaina Holding Company, received several payments running into hundreds of millions of naira into their bank accounts via cheques raised by Dantata and Sawoe Construction Company between 2007 and 2013.

Wetkas, who was led in evidence by the prosecution counsel, M. S. Abubakar, disclosed that there were payments through cheques for N7,408,000 and 7,425,000 from Zenith Bank account of Dantata and Sawoe Construction Company in favour of Bamaina Holding Company on March 5, 2013.

Also, the witness further revealed that on April 23, 2013, there were two cheques of N7,228,900 from Zenith Bank account that were raised in favour of Speeds International Limited which was paid.

Furthermore, Wetkas told the court that a sum of N9,450,000 was paid to Speeds International Limited on October 19, 2010 as well as several payments that were made from the UBA and the former Intercontinental Bank, (now Access Bank) accounts of Dantata and Sawoe Construction Company to the companies owned by Alhaji Lamido.

The witness tendered the payment cheques as exhibits.

Recall that the EFCC re-arraigned Lamido, his two sons: Aminu Sule Lamido and Mustapha Sule Lamido and others that include: Aminu Wada Abubakar, Batholomew Darlington Agoha, Bamaina Holdings Ltd and Speeds International Ltd on an amended 43-count charge for allegedly defrauding Jigawa State to the tune of N1.35billion.