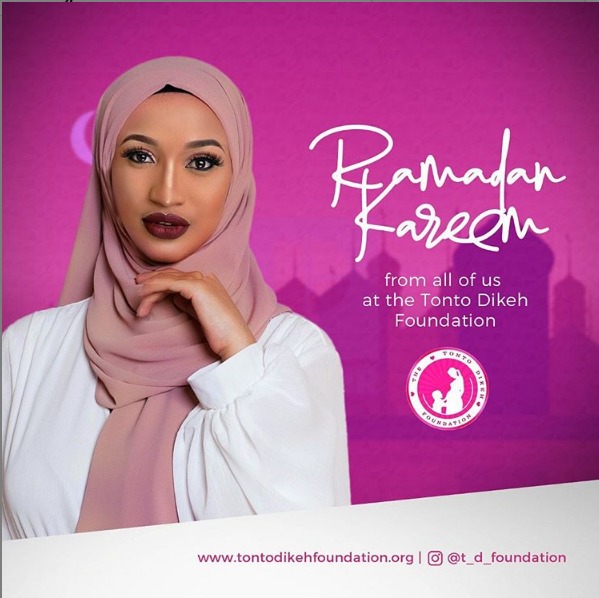 Controversial Nollywood actress, Tonto Dikeh, has revealed that despite beibg a Christian, she has a Muslim boyfriend.

Dikeh, who recently took to the social media to share a message with her Muslim fans during the month of Ramadan, disclosed this while responding to a reaction of one of her fans to the message.

The message had led to a question from a curious fan who wondered if the actress is a Muslim because of the tone of her post.

She then reveals that she is a Christian, but that she has a Muslim boyfriend and lives in a Muslim community.

It is no longer news that a lot of people in Nigeria have parents who practice different religions, such as Christianity and Islam.

And despite the different unrests and crises religion has caused in the country, this has not stopped people from starting relationships with people whose beliefs are different from theirs.

In the photo of the post, the actress was spotted totally covered and dressed like a Muslim woman with hijab; and in her caption, she wrote, “Ramadan Mubarak to all our Muslim Brothers and Sisters, May Allah accept our Prayers, Bless Us and Heal the World…We are with you in spirit and in Truth…Allah Bless you #inshaAllah.”

The tone of her message left some fans wondering about her religion and one even asked if Tonto Dikeh is a Muslim. The actress responded to the comment by saying that she is a Christian but that she has a Muslim boyfriend.

See a screenshot of their exchange below: