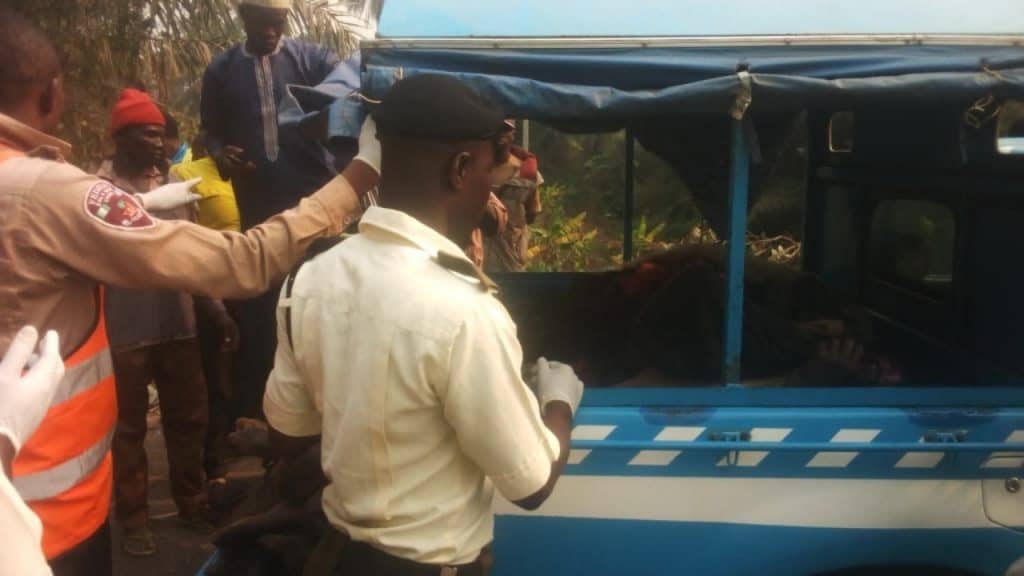 It was a gory sight at the scene of a ghastly auto crash along Ilorin-Jebba highway at the weekend, in Kwara State, as 20 people lost their lives, with 17 burnt beyond recognition.

Sources in the village said the ghastly accident was allegey caused by over speeding and wrongful overtaking by the driver of one of the vehicles involved.

It was further gathered that the alleged reckless driver lost control of his Toyota bus while trying to overtake a lorry loaded with pepper and another truck in front of him resulting in a head-on collision with another truck that was coming at the opposite lane of the road.

His vehicle, according to the villagers, instantly caught fire.

Confirming the incident were both the Kwara State Sector Commander of the Federal Road Safety Corps, FRSC, Jonathan Owoade and the Director of the State Fire Service, Falade Olumuyiwa John, confirmed the accident.

The official report emanating from the FRSC said, “The First information Report, FIR, of the road traffic crash from the unit commander in charge of RS 8.11, Bode Saadu Unit Command, ACC A Ibrahim, disclosed that the accident occurred in the early hours of Saturday, 30/1/2021.”

“One passenger was rescued from the Toyota Hummer bus by the FRSC personnel on arrival at the scene, but the remaining 17 occupants were burnt beyond recognition, as a result of the fire that gutted the bus.

“The Fire service also got to the scene and were able to put off the fire.”

The report however stated that “a total of 31 male adults were involved in the crash, 20 male adult died while 11 were rescued with various degree of injuries, ranging from bruises, burns and fractures, and were taken to Aduagba Clinic & Maternity Olokonla, Kwara State, while the deceased were also deposited at the clinic facility.”

IGP Orders Probe Of Sack Of Female Cop For Getting Pregnant