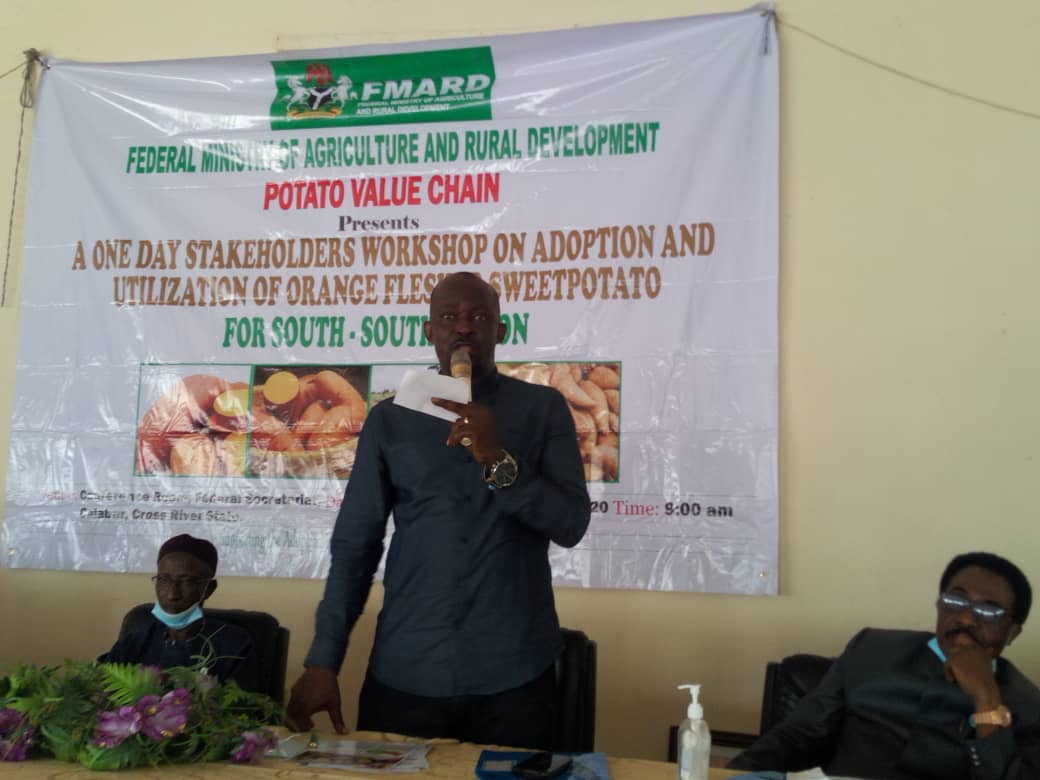 The Federal Government yesterday charged Nigerian farmers to invest in the cultivation of Orange Fleshed Sweet Potatoe, OFSP, which according to the government has enormous potentials to transform the fortunes of farmers who cultivate potatoes.

Minister of Agriculture and Natural Resources, Alhaji Mohammed Nanono, stated this while speaking at a stakeholders meeting on adoption/ utilization of orange fleshed sweet potatoe in Calabar.

Nanono stated that because of the enormous potentials in potatoe cultivation, the Ministry of Agriculture is ready to make her contribution in the development of potatoe value chain.

The minister, who was represented at the meeting by the Director in the Federal Department of Agriculture, Mrs. Karina Babangida, who is also represented by Technical Assistant Director Federal Department of Agriculture, Mr. Muh’d Shehu Adamu, stated that if farmers can venture into cultivation of orange fleshed sweet potatoe, poverty would certainly become a thing of the past, given the potentials which potatoe has.

He siad, “There is potatoe every where, but the ones we have isn’t this variety. The one we are talking about can be used for many things, ranging from amala, puff puff, chips cake, garri, doughnut, pottage, bread, chinchin, juice and kunu.”

The minster assured stakeholders of the ministry’s willingness to push potatoe value chain forward, adding that government was ready to support agricultural drive in the country.

He said that the ministry is willing to explore all opportunities in the value chain in furtherance to achieving food and nutrition security for citizens of our country.

He added, “In achieving the above, be informed that the ministry is willing to contribute to development of potato value chain through its various agencies and research institutes with mandates in rendering technical services and creating enabling environment for agricultural businesses to thrive.”

The minster stressed that the ministry also has quite a number of support services for farmers and processors to benefit from.

Among the support services enumerated by the minister include, farm inputs, such as; agro-chemicals, farm equipment and machinery which according to him were available at subsidized rates.

He added, “I want to use this medium to urge the various research institutes, agencies and development partners with mandates on the potato value chain to work assiduously on creating solutions to the numerous challenges besetting the value chain, using new technologies and innovations to further improve production.

“On this note, it’s my expectation that at the end of this meeting, solutions to the problems identified would have been found. Once again, I wish you all a fruitful and successful deliberations and also declare this meeting open.”

In his remarks, the Cross River State Commissioner for Agriculture, Ntufam Okon Owuna, charged ADPs and various potatoe associations in the agric value chain present to embrace new innovations to build their capacity in production, processing and marketing.

He said, “President Buhari’s administration is the only administration I had seen since I was born with several credit facilities for youths. So take advantage of this opportunities in the Buhari administration.”