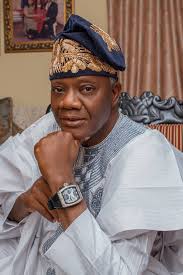 An alumnus of the University of Ife, now Obafemi Awolowo University, OAU, Ile-Ife, Osun State, Basorun Reuben Famuyibo, popularly known as BRF, has called on the people of Ile-Ife to stop the ongoing agitation and protest against the appointment of a non-indigene of the ancient town as the Vice-Chancellor of the university.

Famuyibo, the governorship aspirant of the Accord Party, AP, in the June 18 Ekiti State gubernatorial election, in a statement by his Special Adviser on Media, Olajide Omojolomoju, stated that either as University of Ife, as it was known at establishment by the old Western Region government, or as OAU, by which it is known today, the citadel of learning was never established on a pedestal of ethnicity or indigenousity.

Basorun Famuyibo said, “The founders and foundation members of the university, in the persons of the late sage, Obafemi Awolowo, Prof. Sam Aluko, Prof Olomola and Prof Banji Akitoye, among other pioneers, never in the history of the University of Ife or OAU built the institution on ethnicity. The call by Ife people that an indigene of Ile-Ife should be appointed as the Vice-Chancellor of OAU is not only alien, but archaic to educational development in the South-West. We should desist from this unmeritorious and backward thinking.

Basorun Famuyibo added that no where was it established that the Vice-Chancellor of OAU should be an indigene of Ile-Ife.

He therefore urged Ile-Ifepeople to eschew tribalism and allow peace to reign in the citadel of learning, insisting that what is going on now is an ill-wind that blows no one any good, adding that establishment of the university in Ile-Ife does not mean that the VC should be an indigene of Ile-Ife.