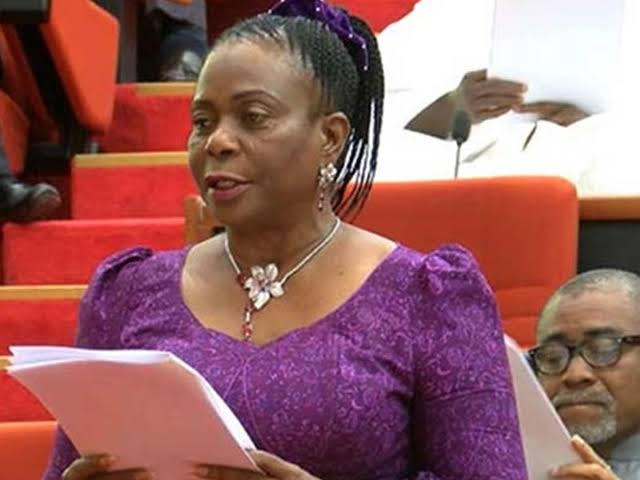 Facebook
Twitter
Pinterest
WhatsApp
Email
The faction of the Peoples Democratic Party, PDP, in Ekiti State, loyal to the senator representing Ekiti South senatorial district in the Senate, Senator Biodun Olujimi, has faulted the inauguration of ward executives of the party in the state without following due process.
Consequently, according to Olujimi, the state leadership of the party has taken definite position on the controversy surrounding the conduct of the PDP ward congress in Ekiti, by swearing-in the authentic ward leaders on Friday, May 1, in line with court pronouncement and party constitution.
The senator, who was a former deputy governor of the state, thereby described as illegal, null and void the inauguration done by  Fayose on April 30.
Recall that the PDP  had in  March conducted two congresses in Ekiti, with the faction loyal to former Governor Ayodele Fayose laying claim to victory, while Olujimi had insisted that it was the congress conducted by her faction that must be recognised.
Senator Olujimi, in a statement  by one Engr. Alaba Agboola, Chairman, Ekiti PDP Repositioning Movement, on her behalf, urged party members to discountenance the said inauguration.
Olujimi insisted that the ward executives inaugurated by Gboyega Oguntuase-led State Working Committee, SWC, of the party, was the authentic ward executives of the party in Ekiti.
She said, “Our attention has been drawn to a purported inauguration of ward executives in Ekiti State on April, 2020 by one Barrister Niyi Idowu, who is based in Lagos and not a member of our party, the PDP.
“We wish to state categorically that no such inauguration ever took place in Ekiti State and we stand solidly by the position of the State Executive Committee, SEC, of the party as expressed by its chairman, Gboyega Oguntuase, to the effect that the said purported inauguration has no basis in law and in fact should be disregarded.
“Our people should learn lessons from the pronouncement of our courts to the effect that only the state organ of a party can inaugurate its local chapters.
“This is the extant position of the law as pronounced by a High Court in Calabar just a few days ago.
“The true position of events in Ekiti State is that only the ward executives elected on March 7, 2020 conducted by the PDP and monitored by the Independent National Electoral Commission, INEC, and security agencies in line with the Constitution of the Federal Republic of Nigeria 1999 and Section 85 and 86 of the Electoral Act, remain authentic and have resumed to work as from May 1, 2020.
“As the tenure of the last ward executive ended at 12 midnight on April 30, 2020, the tenure of the authentic ward executives begins from today and they have been duly inaugurated and begun to function.”
Charging the new ward executives to carry every member of the party along in decision making, Senator Olujimi urged them to embark on aggressive mobilization of all factions in their various wards to build a united, cohesive and well grounded PDP in Ekiti.
She also directed the new ward executives to begin to hold their meetings in line with government directives as it concerns the COVID-19 pandemic.
She added, “The authentic list of the PDP ward executives in Ekiti State shall be published in due course. We congratulate them and wish them a successful tenure in office.”