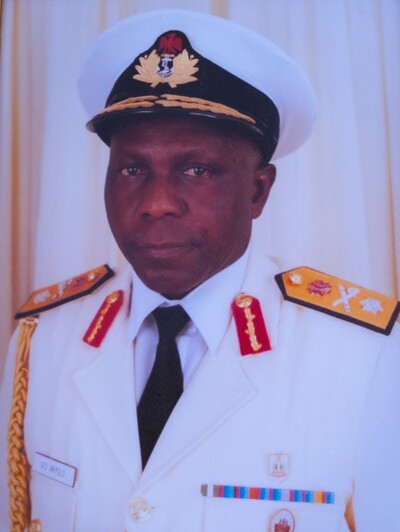 Rear Admiral Akpolo, a one time Fleet Commander, Western Naval Command of the Nigerian Navy, died on April 3, 2020 at the Candler Hospital in Savannah, Georgia, United States of America.

In a statement released on Wednesday in Warri, condoling with the bereaved’s family, Bashorun Ogieh described the late Akpolo as a pillar of strength, who assiduously worked for the development of not only his hometown, Uzere Kingdom, but the entire Isoko nation and the Niger Delta region.

Noting that despite his busy and successful career, the retired Rear Admiral remembered his roots, the DESOPADEC boss said the statement, “I received the news of the death of Rear Admiral Akpolo (retired), a thoroughly accomplished warrior, sired by the Uzere Kingdom with a heavy, sad and painful heart.

“The Usere Kingdom, the Isoko nation, Delta State, and indeed Nigeria have lost a man of immeasurable competence and acuity.

“While we mourn his passing, we cannot but recall that Admiral Akpolo had an unblemished career in the Armed Forces of Nigeria, commanding critical units that spanned, but not limited to Command Intelligence Officer, Eastern Naval Command; Flag Lieutnant to Chief of Naval Staff; Directing Staff, Command and staff College; Executive Officer, NNS Oloku; Commanding Officer, NNS Damisa.

Bashorun Ogieh said that the late Admiral, throughout his very busy career, was ever conscious of his roots, and remained a pillar of support for the development and upliftment of the Uzere kingdom, “unobtrusively ensuring that the Isoko nation is protected, even as he also worked consciously to defend the interests of Delta State and the Niger Delta region.”

He added, “For these and other innumerable contributions to humanity, we will forever remain indebted to our gentleman and gallant officer, who has left us to reside in eternity.

“Whike we will miss his wise counsel in communal matters, we will always cherish Admiral Akpolo’s forthrightness in dealing with issues that seemed insurmountable, but which he always believed were resolvable.

“We are consoled that he is now sailing in the wings of the Comforter, the all knowing God, who has decided that He needs him now in His comfortable abode. We are thankful because we cannot question God’s wisdom.

While praying God to give the wife of the deceased, Mrs Charity Akpolo, the children and grandchildren the fortitude to bear the loss of a doting father, who had an enviable affection for his family and loved ones, the DESOPADEC boss also prayed that ” the soul of our smooth and gentle sailor rest in the bosom of the Lord. Amen.”