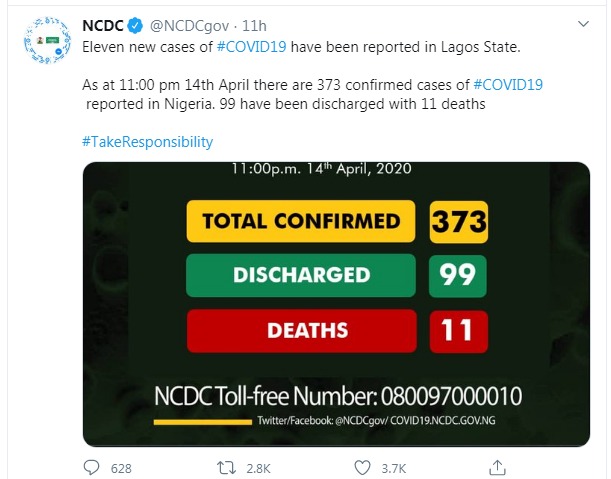 This means Nigeria has recorded the highest increase in COVID-19 cases within 24 hours as the 11 cases were reported in Lagos.

The NCDC on Tuesday night, April 14, announced 11 cases of coronavirus, bringing the total number of Covid-19 cases to 373.

The disease control agency earlier on Tuesday reported 19 cases as Akwa Ibom got one more patient.

In what caused a huge scare, the NCDC announced the 11 new cases; in a tweet by the centre at exactly 11:00 pm; all the eleven cases were recorded in Lagos as the COVID-19 toll in Nigeria’s economic capital tragically rose to 214.

The total number of all cases is now 373 while 99 patients have been successfully discharged with 11 deaths recorded since the outbreak of the disease in the country in February.

Benue, Niger and Anambra still maintain the lowest number of cases as the three states have just one case each.

It was earlier reported that the Lagos State government has announced that it has identified 119 people with COVID-19 symptoms during the recently activated house-to-house search. This was disclosed by Akin Abayomi, the state Commissioner for Health, at a media briefing on Tuesday, April 14.

According to him, a total of 118,000 households have been reached and 119 persons were found with symptoms of coronavirus.

To curb the spread, President Muhammadu Buhari extended the lockdown in the Federal Capital Territory, Lagos and Ogun states for another two weeks.

This was contained in the president’s address to the nation on Monday, April 13.