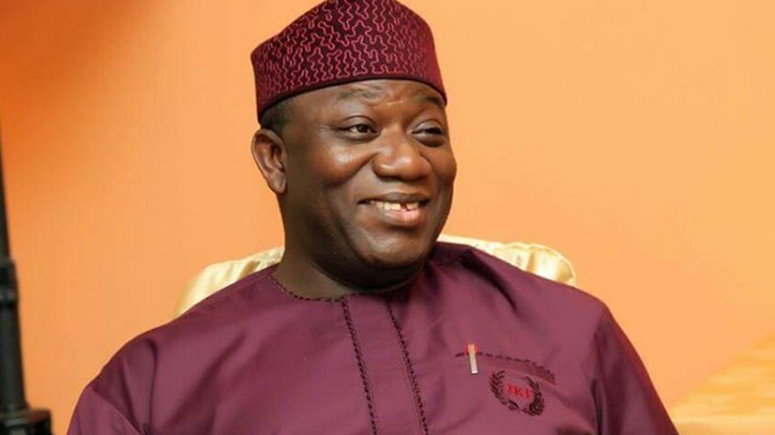 Facebook
Twitter
Pinterest
WhatsApp
Email
A development and civil society organisation, Integrity Leadership Organisation, ILO, has lauded Ekiti State governor, Dr. Kayode Fayemi, for his proactiveness in tackling the spread of coronavirus pandemic  in the state.
It explained that the governor’s initiative made it possible for the state to be one of the safest from the spread of the pandemic.
The group’s commendation is coming shortly after another development group, StearsBusiness, praised Fayemi for scoring  second position among the 36 states of the federation in the fight against coronavirus pandemic.
A statement by ILO’s South West Coordinator,  Lekan Oyediran, said, “This is not the time to play politics with a pandemic such as the coronavirus.”
Noting that various efforts by leaders at all levels in stemming the tide are being observed, recorded and commended, Oyediran listed Fayemi’s proactive leadership, foresight, team work, vision and time management as the “magic” that worked together to put Ekiti in the prime place among the states across the federation  in the “containment and contailment” of the deadly virus.
Oyediran explained, “It is also about brilliance to identify areas of risk for your team and working on measures that will reduce their impact, or stop the problems happening altogether, which have now worked together to make Fayemi achieve the record he posted among his colleagues across the country.”
Pointung out that this was what the people deserved at this time of devastating scourge the world has found itself and not rhetoric that amounted to nothing, the group added, “Politics apart, the people are taking note of who among the leaders that is serving them and who is not at this crucial period.”
It observed that although Ekiti recorded two indexes of the pandemic, the two had since been treated and discharged to go to their various destinations outside the state.
The group said, “Today, the state has zero index of COVID-19, and this is traceable to the proactive and disciplined leadership exuded by Governor Fayemi,” adding that the state’s record was as a result of preparations on ground by the governor as early as March 2, 2020, long before Ekiti recorded its first COVID-19 index case.
Explaining that Governor Fayemi had put machinery in motion by setting up a 47-member committee, creating an isolation centre and providing some funds in anticipation of its possible incursion,Oyediran added, “He also proactively set up a 47-man COVID-19 Response Resource Mobilization Committee, chaired by Aare Afe Babalola, with other past governors of the state as patrons, among other eminent Ekiti indigenes, and gave them the mandate to mobilize resources, direct funding campaign for COVID-19 response, as well as identifying and soliciting effective funding channels.”
The group noted that the initiative yielded positive results in providing palliative measures to cushion the effects of the lock down brought about by the plague.
Recall that Governor Fayemi’s proactive leadership also got a national recognition through an earlier rating conducted by an agency known as StearsBusiness.
Ekiti State scored high in the rating, coming second only to Lagos State out of the 36 states and the Federal Capital Territory, FCT, on the COVID-19 State Response Index.
The rating agency described the index as a “dynamic measure of each state’s aggressiveness in combating the virus”

We’re Unaware Of Sale, Concession Of Some National Assets -Senate