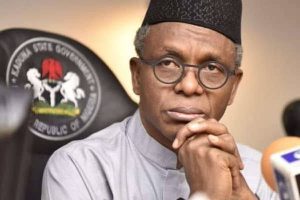 The Kaduna State governor, Nasir El-Rufai, has been restrained from demolishing or taking over Durbar Hotel Plc, along the Muhammadu Buhari Way, in Kaduna.

A Kaduna State High Court handed down the restraining order on Tuesday, January 21, to the governor and all government agencies in the state, not to do anything henceforth on the hotel, which was said to belong to the family of late Head of Staye, Gen. Sani Abacha.

The restraining order was based on an ex-parte motion brought before the court by the hotel’s management and filed by counsel to the Abachas, Mr Reuben Atabor, who asked the court for an order of interim injunction restraining the Kaduna governor and agencies of the state government from demolishing, taking over, or tampering with the property.

Officials of Kaduna State Urban and Property Development Agency had recently commenced the demolition of the hotel, which has been under litigation between the Abachas and the Federal Government of Nigeria since 2001.

Justice Hanatu Balogun, who granted the order barring El-Rufai and agencies of the state government from further trespassing on the property pending the determination of the motion on notice, subsequently adjourned thecase till February 4.

From Trump to Biden: An American Rebirth