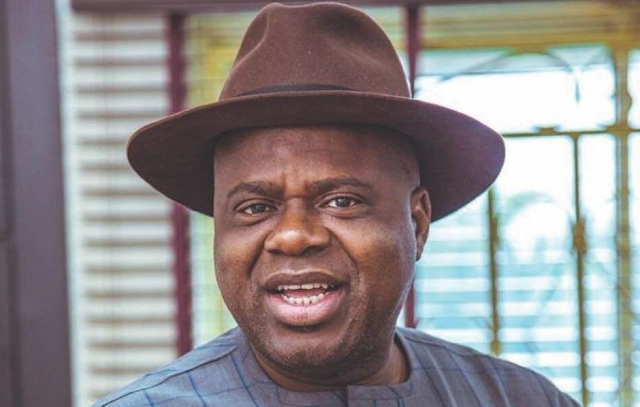 The Central Bank of Nigeria, CBN, has said its Accelerated Agricultural Development Scheme, AADS, is on course in Bayelsa State and that allegations bordering on fraud in the programme were untrue.

The apex bank made the clarification during a courtesy visit of its Yenagoa Branch Controller, Mr. Francis Ene-Asuquo, and his team to Governor Douye Diri in Government House, Yenagoa.

A press release by the governor’s Chief Press Secretary, CPS, Mr. Daniel Alabrah, quoted Mr. Ene-Asuquo as giving thumbs up to the state government for its investment in agriculture and for the robust partnership between both parties.

Acknowledging that for the first time since its creation, Bayelsa State has fully keyed into the CBN’s Anchor Borrowers Scheme, which has propelled farmers to establish themselves into clusters in the state, the Branch Controller stated that N600 million had been disbursed directly to poultry farmers in the state, which made it possible for them to now supply eggs to neighbouring states in commercial quantity.

He said that the government also keyed into the bank’s agric programme in which over N2.2 billion has been disbursed to 2,000 Bayelsans.

While clearing the air on the N3 billion agricultural loan fraud allegation peddled by one Mr. John Idumange, a former General Manager of the Bayelsa Radio Corporation, against the state government, the CBN’s Head of Development Finance, Mr. Stanley Oruyeigha, dismissed the claim as mere speculation and outright falsehood.

Mr. Oruyeigha confirmed that N1.5 billion of the amount was disbursed in the first phase for infrastructure development, which includes completion of the cassava processing factory at Ebedebiri, while in the second phase, the sum of N1.438 billion has been disbursed directly to 3,500 farmers, as well as for the purchase of various agricultural inputs.

Insisting that the process had been transparent and that the balance of N61,699,211.80 was intact, saying, “There are no issues with the N3 billion agric loan to Bayelsa farmers. The first tranche of N1.5 billion was meant for infrastructure and that includes land clearing. No contract of N40 million was paid to anyone. Everything about the fund is safe. Our partner bank is Access Bank.

“I want to emphasise that no money is missing, nor was shared. The Accelerated Agriculture Development Scheme is already a success in the state and it is on course. The land clearing is going on well. CBN is satisfied with the progress so far in Ayamasa, Angalabiri, Korokorosei, Sampou, Agbere, Amassoma and other communities. The governor has never interfered with nor manipulated the scheme since it started.”

While exonerating the state government from involvement in the disbursement of the fund, he emphasized that farmers were the direct beneficiaries and that no government official got a dime.

Oruyeigha further stated that the disbursement is being done in phases and that 75 per cent of land had been cleared by the beneficiaries.

He explained that money for the first phase was disbursed from June and not March 2020, as being speculated; while that of the second phase was received on December 5, 2020 and disbursement commenced in January this year.

According to him, the loan was structured into milestones from land preparation to planting, weeding and harvest.

In his remarks, Governor Diri said his government was not deterred by the activities of armchair critics, as it is focused on changing the Bayelsa developmental narrative.

The governor said that his administration would continue to partner the CBN to actualize the objectives of his prosperity agenda for the state.

He explained that the agric loan was already being processed before his administration came on board and that he would not be deterred by those trying to cause a rift between him and his predecessor.

He stressed that he cannot be blackmailed into appointing those promoting smear campaigns against his government and warned those he called detractors and professional petition writers to desist forthwith.

Averring that with the level of commitment being channeled into farming, the state would soon patronize only rice grown and harvested in its communities, the governor emphasized that his administration would build on the legacies of the previous administration in agriculture.

He said, “We are not deterred by armchair blackmailers and critics. We are focused and we want to bring prosperity to our people. One of the ways to do that is to continue the partnership with CBN in developing our agricultural potential.

“This agric loan was in the offing before we came on board and we followed it up because government is a continuum. I give credit to the former governor and the government that started this agric loan process. Assuming we did nothing about it, that would have been the end of this money they are crying about.

“I was informed that our state has missed out on several other similar schemes. So, to those blackmailers, I would do more of this for the benefit of our people and our state.”

Senator Diri said he appointed credible persons into positions of trust like his Agriculture Commissioner, who himself is a farmer.

He also stated that his government welcomes constructive criticism that would help shape policies to develop the state.

He said he was also not unaware of criticisms that are meant to pull people down, adding, “I have refused to say anything and allowed the system to flow. Fortunately, God has made it possible within this period for CBN to pay a courtesy visit. Before the full glare of the press, we have all heard how the N3 billion is being managed. It is not managed by the state government. There are no funds in the Bayelsa State government treasury concerning the N3 billion. It is managed by the CBN and the Access Bank.

“If anybody wants to be part of it, please approach them. I run a government where commissioners appointed have what it takes to run their ministries.”