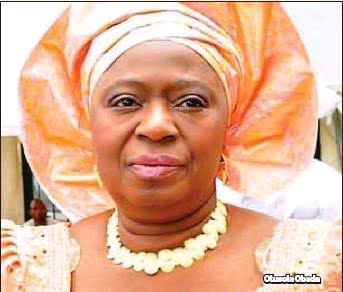 In a tribute the Atona Oodua of Yorubaland signed and made available to the media, Chief George expressed joy and heartfelt gaiety, as the woman he referred to as ‘aburo’ celebrates 70th birthday anniversary.

George said, “You are indeed a woman of strength, of demonstrated valor and probity. You have grappled with challenges, both as a professional lawyer, and as a politician with tact, with sincerity and with determined purposefulness.”

Describing Erelu Obada as “a wonderful ambassador to womankind,” who has “demonstrated excellence and exemplary hardwork in the various positions of leadership” that she has found herself by the Special grace of God, the former military governor of old Ondo State said, “Erelu, you served selflessly and with candor as a minister, and as a party leader, as a mother and as a wife.

“You are indeed a pride to all of us. As you continue to serve with devotion and sacrifice, I pray that the good Lord continues to bless you and your household with good health, with His grace and with His kindness.”

COVID-19: Nigeria In A State Of Jungle