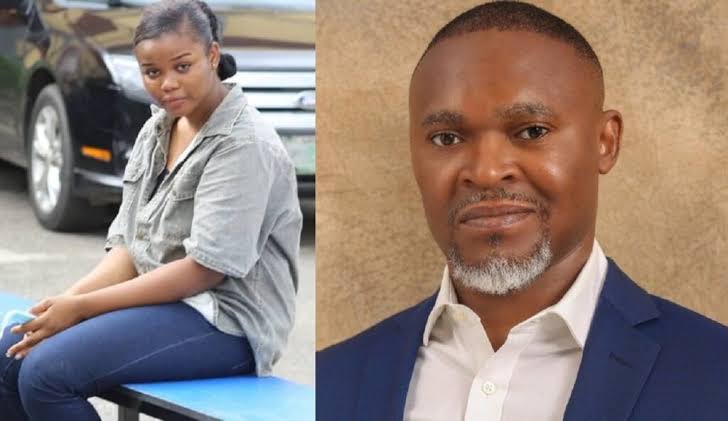 Chidinma Ojukwu is beautiful, enchanting and voluptuous. No wonder predominant comments – especially from men-folk – on this 21-year old self-confessed killer of Lagos-based 50-year old Usifo Ataga, CEO of Super TV, are wrapped in the poser: was she a lethal, destructive woman, the French call the femme fatale, or victim of a delinquent higher institution girls’ sex trade that turned awry?

The story of Chidinma, student of the University of Lagos, which is trending on the social media radar at the moment, is riveting. It is a perfect script for a crime fiction thriller. She courted massive traffic to herself due to the horror of her narrative and the shock people get upon realizing that such physical beauty she represented could be a shawl hiding a dastard cruelty of immense proportion. She is no doubt a prominent member of that cult of young girls who are completely immersed in the flesh-for-cash barter trade that is the hub of the Nigerian social circle. Chidinma had confessed to murdering, via stabbing Ataga, her sexual liaison, at a service apartment in Lekki.

The femme fatale is no doubt an invention of a patriarchal French world. She is a mysterious but beautiful mannequin, whose major stock-in-trade is seduction of men. With the ensnaring charms of her enchanting beauty, this French invention uses herself as deadly bait for men which, when swallowed, becomes the death of them. Her most notorious representations are biblical characters like Delilah, Jezebel and Salome, whose beauty entrapped men to their graves. The femme fatale archetype was also depicted by Irish poet and playwright, about-the-most-successful-playwright of late-Victorian London, Oscar Wilde, in his play, Salome. In the play, Salome manipulated her lustful uncle, King Herod, with an enticing Dance of the Seven Veils. After seducing him, she then asked for the head of John the Baptist, an imperious demand Herod could not decline.

As an aside, Wilde himself was later convicted in a criminal trial for gross indecency in a consensual homosexual liaison with his gay partner, British poet, journalist and son of the Marquess of Queensberry, Lord Alfred Bruce Douglas. Douglas’ father, who abhorred the homosexual relationship, mocked Wilde in the public and the Irish playwright sued him for libel, only for details of his romp with Douglas to become public knowledge. This prompted his conviction and sentencing to two years’ imprisonment, with hard labour in 1895, in one of the first celebrity trials in the world. Imprisoned in Cell No C33 at the Reading, England jailhouse until 1897, Wilde’s experience later formed the muse for that grim realism of life in prison depicted in his The Ballad of Reading Gaol. He later died of meningitis in 1900 at age 46, three years after his release from prison.

Even if you were as unfeeling as to be capable of making barbecue with the ugly, bony and sparse-meat head of a tortoise, when you read the grief-provoking story of Chidinma, you will be sorry for motherhood and for the mother who begot her. From you will flow empathy for that uncertain, painful moment of delivery at the maternity ward which the Yoruba carefully parceled in the panegyric, ‘ikunle abiyamo.’ How could a child, apparently born with much celebration and rejoicing, turn this tragically into a demonic man mauler?

Details of the tragic story are in the public domain and have elicited diverse comments from Nigerians and beyond. They do not need a rehash here. Questions upon questions are being asked but none is yet able to explain the riddle of how such a young girl could perpetrate that gory crime to which she has confessed. In court, lawyers will battle whether the narratives conveyed in Chidinma’s confession and evidence from the murder scene tally with the crime of murder or manslaughter.

Do the multiple stabs, her decision to pay for the hotel with a pseudonym, the withdrawals from deceased Ataga’s account and the fake driving license bearing “Mary Johnson” with her photograph, constitute premeditated murder? Was there absence or presence of the mental element called mens rea in the killing? Those are, however, not our bother here. The society, enveloped in the Chidinma story, is.
From all the narratives presented of this 21-year old, it is obvious that she lived a double-faced life like Janus, the Roman god with two faces. She was a reserved, angelic girl next door at home and in her neighbourhood; and at the same time, a total delinquent in shrouds of innocence.

The second part must have been concealed from her parents, classmates and her tiny rank of friends, but totally open to the world where she caught her fun. Those who know, who have a social barometer that measures the pulse of the town, told me that many parents are like Chidinma’s father and mother – they know very little about who their wards are outside of the home. Away from the English social reformer, statistician and founder of modern nursing, Florence Nightingale picture they cut at home, many of our children are nothing but whores, perverts and drug addicts, who daily frequent fun arenas to get their fixes. From police report, Mr. Ojukwu, Chidinma’s father, got violently antagonistic, like many parents will, when policemen came to their home to arrest his daughter. How could his angelic daughter be the homicidal psychopath the police were looking for?

Chidinma’s viral confession also revealed that she was afflicted by the famous bug that has become a pestilence among the youth in our society – drug addiction. In October, 2017, I did a piece entitled, ‘Our Water Bottle Children Are Here,’ where I explored this menace. I termed the prevalence of drug consumption among our children the new wave of fire that will consume us all soonest.

Drawn into curiosity by the Yoruba language-rendered, high-tempoed hip-hop song of street boy musician, Temitope Adekunle, a.k.a. Small Doctor, entitled “Penalty”, I was told that the fad among youth nowadays is to lace hard drugs in alcohol which they put in water bottles, clutched as youth identity at parties and social gatherings. Small Doctor, in the song, had sang of how the boys were “bringing water bottles into the dancehall” while the musician, who nicknamed self Omo Iya Teacher, deploying beer parlour lingo, enjoined the party crew to “yee ma sun, gba ko je! (don’t be a dunce, so take it and swallow!).”

“We were in the lodge smoking. He was trying to make advances on (sic) me. I was tired and he became violent on it. I let him have his way. Towards afternoon, he ordered roofies. We took it together and ate food,” Chidinma said upon being interrogated. She confessed to withdrawing N380,000 from the deceased’s account to pay her school fees and said, “We smoked SK and Loud…I wanted to use the money I withdrew to pay my school fees. I felt disappointed when the police arrested me at my parents’ house and it was when I was arrested around 10pm that my parents got to know about the incident.”

Chidinma, at that tender age and like many of our children in schools, was already hooked on drugs. I am told that the world of drug consumption has widened dangerously in the dimension of the hopelessness in the land.

Our children have moved away from WHO-classified narcotic substances and psychotropic substances like rohypnol, tramadol, diazepam and lexotan to more lethal ones. I said in the piece referenced above that “a rough survey I carried out indicates that this water bottle culture has become so pervasive among our youth that we could be having a pandemic on our hands. While the list of drugs known to previous generations included cocaine, heroin, marijuana (cannabis) – the latter now with different variants and cognomens – a host of other variants have since erupted. Rohypnol, a strong sedative also known as date rape drug; codeine, a cough suppressant; mephenthamine, alcohol, topiramate, methane from soak-aways, glue, petrol and such like narcotics are the drugs commonly consumed by our children, mostly on campuses.”

While Buba Marwa, Chairman of the National Drug Law Enforcement Agency, NDLEA, may be combing the nooks and crannies of Nigeria for drugs and may be making the success attributed to him in the public sphere, drugs in underground cells and cellars of universities and on the streets will continue blossoming, except Nigeria addresses the huge hopelessness of unemployment in the land.

During the week that just ended, I accosted a secondary school dropout hooked on drugs who, when told the danger of its consumption, peremptorily retorted that die na die, parodying the Shakespearean assertion “…Seeing that death, a necessary end, will come when it will come.” The Chidinma menace of the girl child’s acute dependency on illicit sex for survival too has a lot to do with the failure of successive governments to shine light on Nigeria’s dark economy. It is tied to the apron string of the menace of our children becoming tools in the hands of sex vampires like Usifo Ataga.

As I said in the piece, the political dictates the social and the social is the manifestation of the political; or vice versa. That probably was why late Jamaican reggae icon, Peter Tosh, at the One Love Peace Concert, held on April 22, 1978, at the National Stadium in Kingston, Jamaica, was quoted as saying, “I am not a politician but I suffer its consequences.”

We suffer the consequences of the cumulative bad governance in Nigeria from independence till date: the stealing of our commonwealth and the opaque governance by our military and civilian conquistadors. Parents have thus become victims of this time. That probably was why Mr. Ojukwu couldn’t afford Chidinma’s school fees, why a young girl like her had to depend on takings from hawking her flesh for survival. In many homes, those girls we see trading their flesh as bazaar at bioscopes, hotels and clubs are breadwinners, whose families’ ability to put food on the table is dependent on the number of men’s nakedness these daughters of theirs see per day.

The family in Nigeria has, ipso facto, crumbled, almost irretrievably. Parental failure is everywhere. Values and ethics of the home have taken unceremonious flights. Parents themselves have no time for the development of their children as they are running helter-skelter to make a living. Men like Ataga – though we are not afforded the opportunity of hearing his own side since he is dead – are capitalizing on this collapse of the home and deploying our girls as lubricants of their social and economic dislocation.

Flowing from Tosh, it is obvious that we must all seek to have good governance in Nigeria so that we can embrace developments and low crimes, the type in saner climes. It is the only remedy to the hopelessness that breeds the calamities of Chidinma and the menace of Atagas.

Oyetola Celebrates Aregbesola On His Birthday