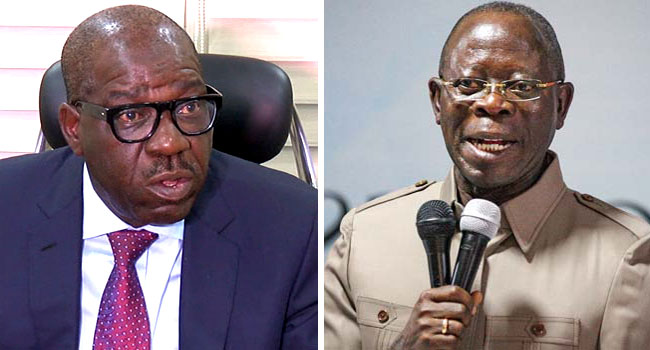 …I Won’t Appeal My Disqualification – Obaseki

The All Progressives Congress, APC, has announced the disqualification of the incumbent governor of Edo State, Godwin Obaseki and two other aspirants from contesting in the party’s primary election scheduled for June 22.

Obaseki’s disqualification was said to have been premised on his Higher School Leaving Certificate, which is said not to be known to the law in Nigeria.

Recall that Obaseki and his estranged godfather, Adams Oshiomhole, who is the national chairman of the party, have been torn apart over political differences for a while now.

Meanwhile, Obaseki, who is seeking re-election on the APC platform for a second term in office, has openly opposed the use of direct primary mode for the primary election, against the wish of the party.

Disclosing the outcome of the screening exercise carried out by the APC, the seven-man screening committee, led by Prof. Jonathan Ayuba, said the report of the committee is conclusive, adding that all members of the panel signed the report.

Prof. Ayuba said the committee were thorough in the screening process while conducting the exercise, insisting that the process was recorded and the unedited recording will be made available.

He added that the recommendations of the committee in the report were based on evidences and not hear say.

Meanwhile, the immediate past National Chairman of the APC, Chief John Odigie-Oyegun, has described the disqualification of Governor Obaseki by the APC screening panel it as “a hatchet job.”

In a statement signed by Oyegun’s Public Affairs Adviser, Ray Morphy, the former governor of Edo State said, “The disqualification of Obaseki by the APC Screening Panel is a hatchet job aimed at installing a stooge that will allow some people unfettered access to Edo State treasury.

“While not a surprise, that disqualification is clear indication that internal democracy has been murdered in APC, a party which we founded on the principles of fairplay and good conscience!

“I daresay that APC will suffer dire consequences in Edo state if this disqualification is not speedily reversed.

Responding, Obaseki ruled out appealing his disqualification from participating in the governorship primaries of the APC scheduled for June 22.

In a statement by his media aide, Crusoe Osagie, Obaseki said it is needless filing an appeal, when the National Chairman, Adams Oshiomhole, has carefully orchestrated the move from the beginning.

He called on his supporters to be calm, urging them to wait for further directives.

The statement said, “We have watched the mockery of democratic process, which Comrade Adams Oshiomhole, is administering and superintending over in our great party, the All Progressives Congress, APC. It has been an unfortunate, disheartening and dreadful spectacle.

“We had initially asserted that going by the open display and enthronement of illegality by one man in the party that comprises several organs and eminent personalities, there is no way that Governor Godwin Obaseki would get a fair assessment in the run-up to the nomination of candidates to fly the flag of the party in the forthcoming Edo gubernatorial election.

“It is unfortunate that this open show of shame, illegality and travesty of justice is the brand of democracy which Comrade Oshiomhole has reduced the APC into. The situation is quite saddening because this is a party supposedly reputed for change, equity and social justice.

“We have therefore decided that it would be effort in futility to appeal whatever the unjust outcome of the evaluation and screening process of the APC will be, especially when Comrade Oshiomhole has declared that he is the Supreme Court and ultimate determiner of the fate and future of our great party.

“We wish Oshiomhole luck in his maladministration of the party and trust that the Almighty will help our country to find the path to true liberty, freedom and justice.

“We call on all party members and the teeming supporters of governor Obaseki to remain calm and await further directives.”

FG To Tinker With Labour Laws Over Constant Disputes -Keyamo