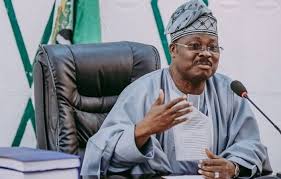 Indications have emerged that newly-appointed National Deputy Chairman, South, of the All Progressives Congress, APC, and former governor of Oyo State, Abiola Ajimobi, may emerge as Acting National Chairman of the party.

This development is a follow up to the sack of the APC National Chairman, Adams Oshiomhole, by a Federal Capital Territory, FCT, High Court, presided over by Justice Danlami Senchi, as well as the hurried release of names of new national officers of the party, including that of Ajimobi.

National Publicity Secretary of the party, Lanre Issa Onilu, in a statement late Wednesday said that the National Working Committee, NWC, of the party at its meeting of January 14, agreed to appoint new national officers to fill vacant offices in the party’s National Executive Council, NEC.