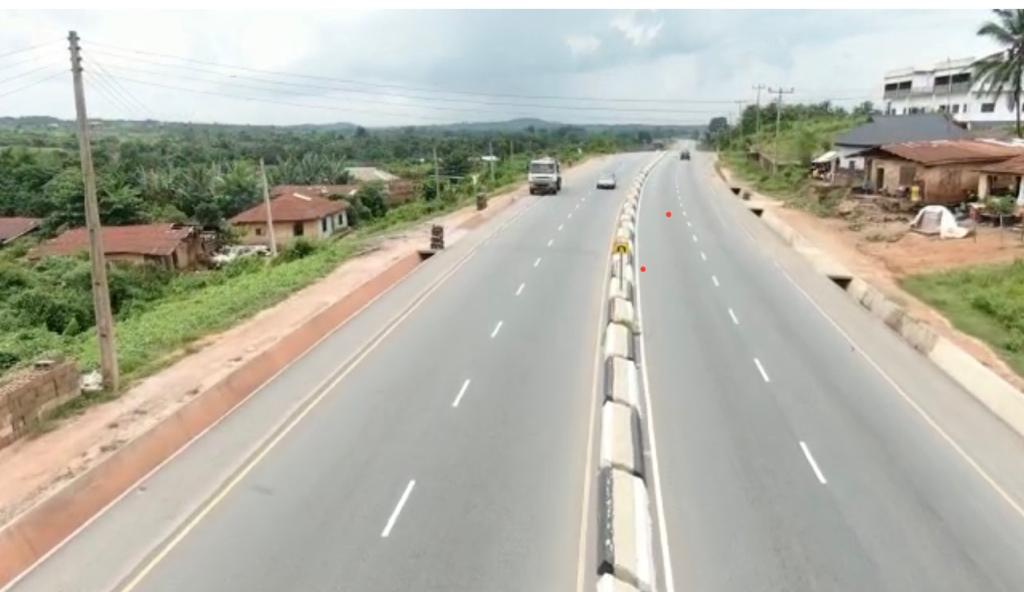 The re-construction of Kemta-Ilugun-Somorin-Obantoko road in Abeokuta metropolis by the Prince Dapo Abiodun-administration has reached 80 per cent completion stage.

The 6.9 kilometre road serves as a major bypass, linking Obantoko with Kemta-Idiaba.

Repair work on the road has already increased economic and social activities of the adjoining communities.

Sequel to the construction of the road, hotels, shopping complexes, private schools and modern buildings have been springing up in the area.

Residents of the area have been upbeat and happy that the re-construction of the road has become a reality, after waiting endlessly for succour, which did not come until Governor Abiodun came to their rescue.

Some residents said that they had hoped that the location of the residence of Nobel Laurette, Professor Wole Soyinka, to the area would spur the state government to do the road.

The residents also expressed surprise that the road construction is being done without their houses being demolished, because the immediate past government of Governor Ibikunle Amosun had earmarked some houses for demolition to pave the way for the road project.

An excited resident, Mr Abimbola Ogunmuyiwa, said that the new road had brought development to the area in different dimensions.

Ogunmuyiwa said, “We are very grateful to the administration of Governor Abiodun for this particular road construction which has improved life in communities in this area in no small measure.

“Before this road was constructed, getting home after the day’s work was very difficult but now you are at the Federal Medical Centre within 10 to 15 minutes, unlike before when you spent hours.”

A journalist, Ernest Nwokolo, who lives at Ilugun, said that the construction of the road was a big relief to residents of his area.

Nwokolo said, “Though the road is not yet 100 per cent completed, it has been of tremendous help to the people and it has increased the value of properties in the area.

“With the construction of the road, one can now keep appointments, because one does not need to wait for a very long time before getting vehicles to Idiaba and from there to other parts of Abeokuta metropolis.

“For those who drive their own vehicles, relief has come for them, because it will now save them the money being spent on spare parts to repair their vehicles.

“Apart from saving the man-hours being spent before bursting out at Kemta Junction, the road has made the value of properties to appreciate. A plot of land that was being sold for N500,000 in 2018 is now being sold for N3 million and above now, depending on how close it is to the main road. Some are sold for as much as N5 million.”

The impact of the road is not only being felt by residents of the communities, as people who commute daily from Osiele, Camp and Obantoko are now enjoying these dividends of democracy as the long man-hours being wasted in traffic on Obantoko-Asero-Adatan Road, is now over.

A lecturer at the Federal College of Education, Osiele, Dr Adewunmi Ayodele, whose house is at Laderin, said that the road was a major relief for him and others who are living in the metropolis, but working at either FCE or Federal University of Agriculture.

He said, “Before this road was constructed, I used to leave my house at Laderin by 6:15am and I won’t get to the office earlier than 8:30am due to the long hours spent on the deplorable Asero/Obantoko Road.

“But now, I can leave my house at past seven and get to my office earlier than before, because with this road, I just burst out at Somorin and off I go to Camp. It is a great relief for me and others working at Osiele and Camp axis.”

Also speaking on the impact of the road, a taxi driver, Mr Mudashiru Alao, commended Governor Abiodun for a job well done.

According to Alao, he can now carry passengers directly from Lafenwa to Osiele in a shorter time, unlike before when he spent hours in traffic.

Alao, who said that the road is now an outer ring road to Abeokuta from Idiaba to Somorin Obantoko, expressed delight that his income had increased because he now prefers to ply Lafenwa/Obantoko/Osiele directly without wasting too much time in traffic, stating that people should reward the good work by supporting Abiodun’s second term election bid.