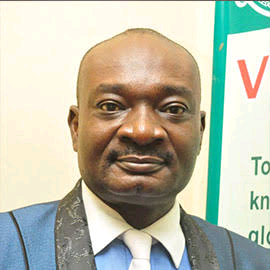 The Vice Chancellor of the Federal University of Agriculture, Abeokuta, FUNAAB, Prof. Kolawole Salako, has reacted swiftly to the release of his student abducted over the weekend, Toyinbo Olayinka, saying, “We thank God everything went well; our student came out safe and sound.”

This was just as he reiterated the commitment of his administration to students welfare and well being.

This was contained in a statement signed and made available to the media by the Head, FUNAAB’s Directorate of Public Affairs, Kola Adepoju, where the Vice Chancellor expressed gratitude to the Almighty, security agencies and the public in general, during an interactive meeting with the student executives at the Student Union Building, earlier today.

The statement stated that Prof Salako commended the students for solidarising with their colleague while in the custody of the abductors.

Prof Salako, who noted that the Monday protest by the students ovee the abduction of their colleague was peaceful, but however warned them of the danger inherent in any form of protest.

He averred that any protest, no matter how peaceful and genuine, is capable of being hijacked, especially by die-hard extremists, who are known as neo-anarchists.

The Vice Chancellor charged the students to be cautious of protests and embrace dialogue in addressing issues, no matter how pressing and urgent.

He condemned in strong terms a situation where an innocent youth was kidnapped in a private farm where he’s been ekeing out a living as a self-sponsored indigent student.

He pointed out that the incident is discouraging to farming, especially, to students who are into farming.

The Vice Chancellor reiterated his administration’s commitment to the well being of the entire students and members of the entire university community.