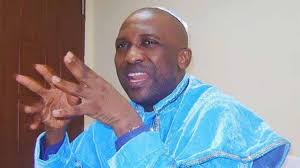 Unless the ruling All Progressives Congress, APC, put its house in order and select the right candidates, there are every likely that the party may lose Ondo and Edo states governorship seats in the forthcoming gubernatorial elections in the two states.

Explaining reasons why the APC may lose both states governorship seats it occupied presently, the leader of INRI Evangelical Spiritual Church, Primate Elijah Ayodele, in a new revelation of what God told him about the two elections, said, “In Ondo State, the right candidate for the APC is Engr Oyedele Ifeoluwa.”

He added that if the party does not want Governor Oluwarotimi Akeredolu for a second term, then APC’s best choice is Ifeoluwa, adding that any other candidate will spell doom for the party in Ondo State.

For the opposition Peoples Democratic Party, PDP, in the Sunshine State, the manof God revealed that the only candidate he sees In the party is Eyitayo Jegede

He reiterated, ‘’In the PDP, the only viable candidate that can be produced is Eyitayo Jegede; he is the only one that can beat all other candidates in the general election.’’

In the case of Edo State, the cleric advised Governor Godwin Obaseki to put his house in order if he wants to return to office for a second term in office.

He revealed that he sees a kangaroo game being played and if the APC chooses Ize Iyamu as its candidate, the party might lose Edo State.

He said, ‘’Obaseki can win if he follows the right advice. If he should put all his house in order and do more consultation, he will defeat Ize Iyamu; but if care isn’t taken, they will play a kangaroo to outsmart Obaseki. If Obaseki wins in the APC,  Obaseki can still make a headway in Edo election.

“Ize Iyamu isn’t the right candidate who can unseat Obaseki. If Obaseki plays his game well, he will win the primaries, because there are some crooked activities that is going on. Obaseki must follow Oshiomhole’s camp closely, if he wants to win.

Admonishing the incumbent Edo governor not to look back, but fight a good fight, Primate Ayodele said that the primary election will be very bloody in Edo State, “because the governor will fighpresentlys last blood.”

He added, “If APC mistakenly gives Ize Iyamu the ticket, there will be challenges and it’s most likely APC lose Edo State.”