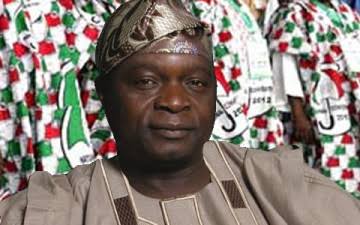 ….Only Enemies Of The People’ll Oppose Amotekun -Makinde

The governor of Oyo State, Engineer Seyi Makinde, on Wednesday, joined leaders of the Peoples Democratic Party, PDP, in the South-West geopolitical zone to receive bigwigs from rival political parties to the party, declaring that a fresh wave of unity, which will move across Nigeria, has begun in the South-West.

Makinde, speaking at the PDP South-West Unification Rally, held at the historic Mapo Hall, Ibadan, stated that the return of a former governor of Osun State, Prince Olagunsoye Oyinlola, his supporters and other chieftains of different political parties to the PDP was a signal of a party on the rise.

in a statement by the Chief Press Secretary to Governor Makinde, Mr. Taiwo Adisa, the governor was quoted as stating that if the South-West geopolitical zone is united, the whole country will be united.

Others included former chieftains of the Action Democratic Party, ADP; Zenith Labour Party, ZLP, as well as some former members of the Oyo State House of Assembly.

Makinde said, “Today is the beginning of unity in the South-West region. If South-West is united, the whole country will be united. We are using this opportunity to welcome our brothers and sisters from APC, ADP, ZLP, SDP and ADC.

“I want you to take two things home. And the first is; they are of the opinion that we should not have staged this rally because of the Coronavirus pandemic; but it was one of their leaders who said Coronavirus has already infiltrated their party. We all know that there is no Coronavirus in our own party.

“The second is, last week, some people went to Lagos to protest against Amotekun. They did the same in Ekiti yesterday. And you will begin to wonder if these elements are really of Yoruba extraction. But the truth of the matter, which has also been established, is that our people want Amotekun and it has come to stay.

“So, I want to urge us to show deep love to our leaders and their loyalists who have joined us again. Let us tell them they are welcome to their home.”

Speaking at the well-attended event, Prince Oyinlola, a former National Secretary of the PDP, said time has come to restructure the country, noting that the deception of the APC as well as greed, avarice and nepotism that have dominated the Nigerian polity under the APC, have become unbearable.

He advised PDP members to handle matters within the party with wisdom and learn to unite themselves.

He said, “I greet our party’s National Leader, Prince Uche Secondus, who is ably represented by retired military officer, Austin Akobundu. I also greet all the leaders of the PDP in the South-West.

“I will be brief but I want you to be patient because of some vital information we need to take home today. When I informed my people that we were going to join PDP in Ibadan, some of them asked me what inspired such move, and I told them Ibadan is the centre of politics in the South-West.

“So, on the current level of politics in Nigeria, I don’t think the proper thing is being done. I am saying this because I understand the political history of this country. They deceived us that they wanted to restructure the system of governance and we fell for it. Upon their assumption of office, they told us they didn’t understand the concept of restructuring again. I see that as a total deception.

“So, I want our people at home to know that this is the right time to restructure politics in the South-West region, because we can no longer continue working effortlessly without reward.

“I have a piece of advice for our party. I appeal to us not to feel too wise about handling matters within the party, because the end result, sometimes, could lead to failure. Let us be sagacious in whatever we are doing.

“My second advice is, we must learn to unite ourselves, work together with one another to achieve a common aim. So, I appreciate you all for your support and the massive turnout, which you have all showed to me and my supporters. We thank you for accepting us back to this party.

“Lastly, I want to pray that the Almighty God will, in his infinite mercy, restore the lost glory of the PDP.”

No High Profile Individual’ll Be Shielded From Corruption Prosecution -Magu