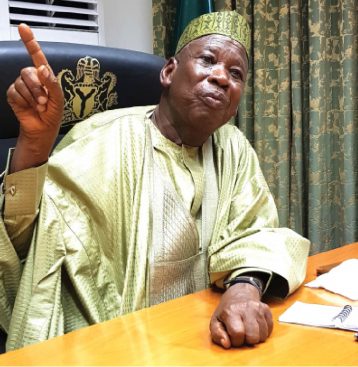 …Says Kano Has Also Received Almajiris From Other States

The Kano State governor, Abdullahi Ganduje, has rebuked his Northern state governors’ counterparts, who are politicising the transfer of almajiri students to their states of origin, amid the coronavirus pandemic.

Recall that the Northern Governor’s Forum reached a consensus last month to ban the almajiri system, a form of education that requires young children to be sent far away from their homes to Islamic scholars, as part of efforts to curb the spread of COVID-19 in Nigeria.

The governors also agreed to evacuate the almajiris back to their parents or states of origin to minimise their exposure to the disease, which has infected over four million people across the world.

But, since the repatriation commenced, some of the children have tested positive for the disease after returning to their home states.

In a statement on Sunday, May 10, 2020, Ganduje said there was no need for the politicization of the almajiri repatriation by his colleague governors, adding that his state has also received infected almajiris from other states, but that he decided to not make any noise about it because the patients don’t need publicity but care.

He said, “The way we are sending back almajiris to their states of origin, we are also receiving almajiris from other states who are Kano indigenes.

“But the fact that we are not making noise about it does not mean they are all healthy without COVID-19 infections.

“Let’s make it categorically clear that some of the almajiris brought to Kano during the exercise are also COVID-19 positive, but we are not making politics out of it. Because we all believe that what they need most now is not noise making or publicity. What they need at this critical point in time is, care giving.”

Recall that Ganduje has been roundly criticised for his handling of the coronavirus outbreak in the state as it has recorded the second highest number of coronavirus cases with 602, behind Lagos with 1,845.