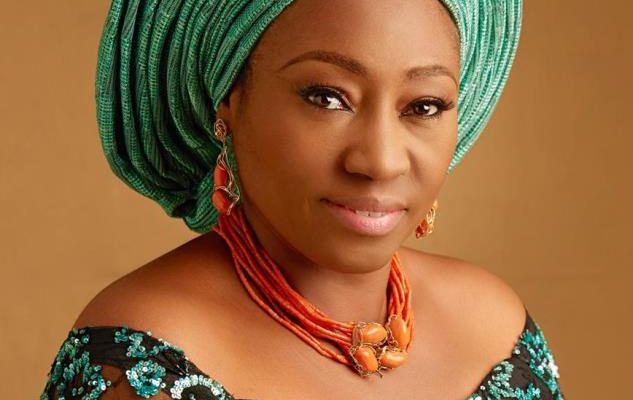 For the bold, brilliant and beautiful fashionista, Erelu Bisi Adeleye-Fayemi, every June 11 is her day of celebration, for that is the day she was born. As she clocks 57 this year, and amidst the COVID-19 hoopla that has rendered the whole world socially isolated, the music she should listen to is “Groove Is in the Heart,” a song by the American dance band Deee-Lite. It was released in August 1990 as the lead single from their debut album, World Clique.

Yes, Erelu, as she fondly called by folk, friends and admirers alike, deserves to be celebrated this year as always. She is grooving through life in diverse ways and phases. She has conquered her environment, yet remains humble. COVID-19 or no COVID-19, social distancing or no social distancing, this intellectually balanced lady has roundly paid her dues. She is well groomed, socially on point, spiritually upright and politically key.

Adeleye-Fayemi was born in Liverpool, England, on 11 June, 1963. She received her bachelor’s and master’s degrees in History from the University of Ife, now the Obafemi Awolowo University, Nigeria. She also received an MA in Gender and Society (1992) from Middlesex University, UK. Ms Fayemi is the First Lady of Ekiti State Nigeria, as wife of the Ekiti State Governor 2018-2022. She was also previously Ekiti State First Lady in 2010-2014. In 2001, she co-founded the African Women’s Development Fund, AWDF, the first Pan-African grant-making organisation. She served as a UN Women Nigeria Senior Advisor, and was appointed as a Visiting Senior Research Fellow at King’s College, University of London in 2017-2018. She is CEO, Above Whispers Limited, and runs an online community called Abovewhispers.com.

Leymah Gbowee of Liberia, 2011 Nobel Peace Prize winner, delivered Adeleye-Fayemi’s 50th birthday lecture in 2013 titled “Leading the Change: The Journey of an African Woman.” She has this to say to her, “…Bisi, you have helped us to achieve change. You have used your position to sew dreams and show that change is possible and helped to set our minds to it. That I won the Nobel prize is because of people like you. That day, you didn’t see me. You saw a sister. Today we say, ‘Thank you’. You have helped to set our minds to it.”

So, our celebrant is globally acclaimed. She is an elite and a sophisticated one for that matter. Yet she is not comfortable with just sitting in such a comfort zone, while watching others suffer. She doesn’t believe in the “we-versus-them” style of living. She has activism running in her blood and has earned global acclaims in that area. Recently, Ms Adeleye-Fayemi was listed among the 100 leading women in Africa for her numerous contributions to feminism.

Prior to that, she had bagged various awards and recognitions such as the “Changing the Face of Philanthropy” award by the Women’s Funding Network in 2007. She was named one of the 20 most influential African women in 2009 by New African magazine. In 2011, _Women Deliver_ listed her as one of the top 100 people in the world, advancing the rights of women and girls. In 2019, she was awarded the 2018 Zik Leadership Prize for Humanitarian Leadership by Public Policy Research and Analysis Centre, PPRAC.

So, how do we celebrate such a heroine without having to break the banks? How do we make her know that her achievements and her influence on all of us without any stratification count? And to think we are forbidden from gathering in our thousands to groove the groove with our grand celebrant?

We must therefore come up with diverse ways to sing her praises, we must shower her with gifts of different kinds, shapes and sizes, we must gather through all sorts of social media makeshifts with a bid to literarily raise the roof and proclaim all she stands for to the world. We must sing, dance and pray. But, in all of these, some will still not resist that urge to want to see, feel and hug her.

Erelu is not just any soul. She is an exceptional soul, gifted with different kinds of leadership virtues in every area she has forayed. As the First Lady of Ekiti State, one may liken her to some of the First Ladies who have impacted their societies in no small measure. And I dare to mention the following FLOTUS.

Adeleye-Fayemi can be likened to Hillary Clinton, wife of William Jefferson Clinton, the 42nd President of the United States from 1993 to 2001. Hillary is the first First Lady to hold a postgraduate degree and a full-time professional career before becoming First Lady. She was one of her husband’s most trusted advisers in both the White House and on the campaign trail. She held offices in the East Wing and the West Wing. After her husband’s presidency, she became the first First Lady to hold public office when she was elected senator of New York. She later became Secretary of State under President Barack Obama and has run for the post of president twice. She was the first female presidential candidate nominated by a major party.

Adeleye-Fayemi can be likened to Eleanor Roosevelt, an inspirational First Lady, who drastically changed the role of First Lady, travelling often and making many public appearances and speeches about children’s causes and human rights. Eleanor consistently spoke out against racism and sexism, she focused on helping the country’s impoverished people. Eleanor Roosevelt later became chair of the U.N.’s Human Rights Commission and helped write the Universal Declaration of Human Rights. She was assigned to the U.N. by President John F. Kennedy and was appointed to the National Advisory Committee of the Peace Corps and the chair of the President’s Commission on the Status of Women.

Adeleye-Fayemi can be likened to Jacqueline Kennedy Onassis, wife of President John F. Kennedy. Jackie O, as fondly called, stands as the most beloved First Lady in U.S. history. Not only were her style and grace admired, but she had incredible drive in her role in the White House. Onassis transformed the White House into a museum of American history and culture that would inspire patriotism and public service in those who visited. She was also a patron of the arts and frequent traveler with her husband, which earned her admiration from Americans and foreign citizens alike.

Adeleye-Fayemi can be likened to Michelle Obama, who served as FLOTUS alongside her husband, President Barack Obama, from 2009 to 2017. She was one of the most involved and passionate first ladies America has ever seen. Her drive to make a difference was unforgettable – and she had fun doing it. Some of her most significant accomplishments include founding Let’s Move! to combat childhood obesity, creating the Reach Higher Initiative to “[expose] students to college and career opportunities,” and empowering young women to get an education with Let Girls Learn.

Adeleye-Fayemi can be likened to Edith Roosevelt, a down-to-earth First Lady who served as First Lady from 1901 to 1909 as the wife of Theodore Roosevelt. Theodore was a seriously dedicated First Fady, and she received love from many Americans. In addition to totally revamping the White House, she showed a true interest in helping those in need. According to the National First Ladies’ Library, “Her secretary recalled that the First Lady most frequently sent large gifts of cash to various free hospitals that treated the poor, instructing physicians to hand out cash sums to those being discharged.”

Adeleye-Fayemi can be likened to Rosalynn Carter, wife of the 39th president of the United States, Jimmy Carter. She took her duties as First Lady seriously from 1977 to 1981, leading Americans to admire her hard work. She was an advocate for the cause of mental health, pushed for support of the Equal Rights Amendment, and was supportive of the arts — to name a few areas of her passionate work. Carter once referred to his wife as “an equal extension” of himself.

It is for these invaluable contributions that she deserves a unique, rare, yet much prized gift this year: Please let’s go out and gather orchids. Orchids don’t come easy. They are the most highly coveted of ornamental plants. Delicate, exotic and graceful, orchid represents love, luxury, beauty and strength. In the ancient Greece, orchids were associated with virility. During the Victorian era, orchid symbolism shifted to luxury, and today this sense of magnificence and artful splendor continues, with orchids representing rare and delicate beauty.

Purple orchids symbolize admiration, respect, dignity and royalty. Adeleye-Fayemi, despite her acclaims, is humble and does everything with dignity. Yellow orchids represent friendship, joy and new beginnings. Adeleye-Fayemi makes friends with ease and is never afraid of a new beginning. Orange orchids symbolize enthusiasm, boldness and pride. Adeleye-Fayemi is not only beautiful, she is bold, enthusiastic and proudly a traditional person. Green orchids are thought to bring good fortune and blessings. They represent good health, nature and longevity. Adeleye-Fayemi’s naturalness is not doubtful. Her state of health is balanced and not only is her future guratenteed, she will certainly live long.