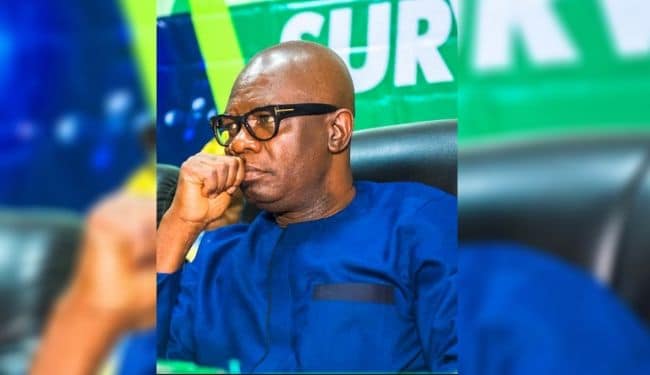 The presiding Judge, Justice Adegbehingbe, threw out the motion exparte, filed by a disgruntled member of the party and asked him to serve the necessary parties, instead of coming through motion exparte.

A member of the PDP, Mr Olopele Konstante Timi, had through his counsel, Akpofiweii Anthony, sought the disqualification of the Ajayi over allegation that his certificate was forged.

Olopele, in the suit, dragged Ajayi, who is also a PDP gubernatorial aspirant, to an Akure High Court, seeking his disqualification from Wednesday’s primary election of the PDP.

He averred that Hon. Ajayi has breached the code of conduct for public officers and he should therefore be banned from holding any public office for a maximum of ten years going forward.

The exparte motion, brought before the court, was instituted with originating summon that was dated July 17, 2020 with suit no. AK/45M/2020, where the claimant averred that the Deputy Governor of Ondo State has consistently acted in breach of Section 1, 5th Schedule, Part 1 of the Code of Conduct for Public Officers.

He also hinges the prayer for the disqualification of Hon. Ajayi on the Deputy Governor’s breach of the provisions of the West African Examination Council (WAEC) Act, Cap W4 Law of the Federal Republic of Nigeria, 2004.

The Deputy Governor had said severally that the facts and issues in the matter are the same as the case already adjudicated upon by the Court of Appeal in appeal case number: CA/B/EPT/330A/2008, between the Deputy Governor, Hon. Ajayi (then member of the National Assembly) and Prince Olubukola Ebietomiye of the Democratic Peoples Alliance, DPA, in 2007, wherein the appellant was absolved of any wrong doing.

Also, the same matter was adjudicated upon in the suit, Olukayode Ijifusi vs. Hon. Alfred Agboola Ajayi, suit number: FCT/CV/1261/2020, before Hon. Justice Adeniyi and again the Deputy Governor was vindicated.

In dismissing the motion exparte, Justice Adegbehingbe fixed the hearing of the substantive suit for July 30.