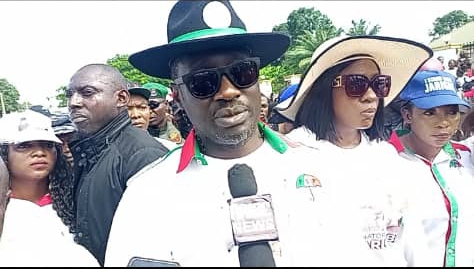 Ahead of the 2023 senatorial election, stakeholders of the Peoples Democratic Party, PDP, have shut down Ogoja town halting vehicular movement and other economic activities as a one-million man march they organised in support of Jarigbe Agom’s senatorial ambition took over the town.

The PDP stakeholders averred that their support for Jarigbe is hinged on his track records in the National Assembly.

They commended the lawmaker for his selfless service and the lofty projects and programmes that are people-oriented, which he has initiated and brought to the Cross River North senatorial district of Cross River State. 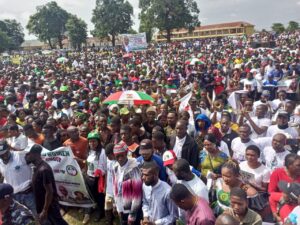 In his earlier remarks, the PDP House of Representatives’ candidate for Ogoja/Yala federal constituency, Godwin Offiono, stated that the one-million man march, organised by stakeholders of the party is a stride showing that the lawmaker can win the election in the senatorial district any time any day.

He described the lawmaker as the governor-general of Cross River North, who has done exceedingly very well and deserves re-election; adding that the one-million man march in support of the former member of the House of Representatives is an expression of solidarity, love and acceptance by the people. 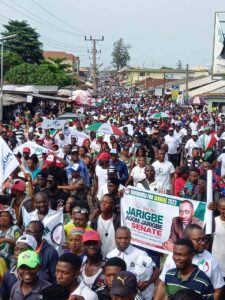 Also speaking, a retired Permanent Secretary, Dr. Ikani Wogor, who spoke alongside other distinguished personalities of the party, stated that with the turn-out, the people have put an imprimatur on the district.

Wogor said, “The imprimatur he said is for Senator Jarigbe and no other person can take it away.”

Addressing party supporters, Senator Agom, who is the incumbent senator representing Cross River North at the National Assembly, and PDP senatorial candidate in the 2023 general elections, promised to defeat the state governor any time any day to return to the Senate. 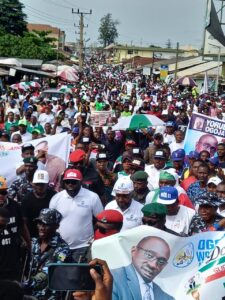 The National Assembly member assured the constituents of his willingness to attract more capital projects to the constituency, calling on the people not to vote any other party than the PDP, which can bring succour to the senatorial district.

He said, “I am going to defeat the state governor in that contest. I will defeat him.”

The PDP senatorial candidate stated that it was due to the love he has for his people that he went to the Senate, so as to attract projects to the senatorial district.

He stressed that he has demonstrated empathy for his people by putting himself in their shoes; stressing that their support for him is unparallelled.

He added, “I treat my people with empathy, put myself in their shoes and their support for me is actually unparallelled, I owe them a lot.

“I’ve provided most of what the people need and have filled the gaps.

“Return all the PDP candidates and it will be better for all of us.”