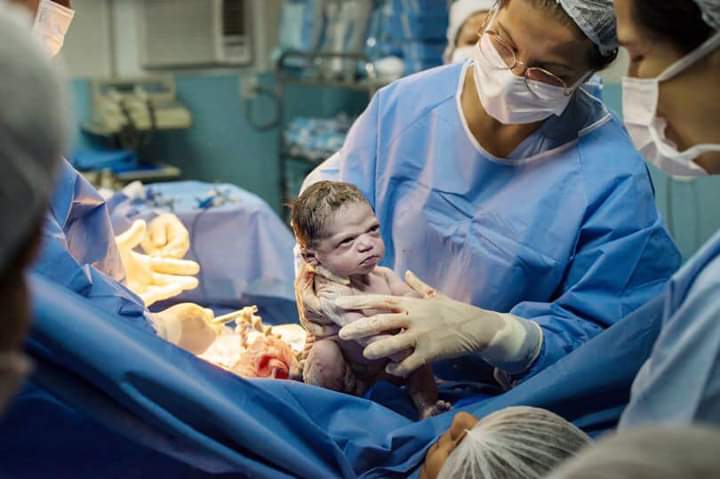 A newly born babygirl, Isabela Pereira de Jesus, has become an instant Internet sensation, after a photo of her grumpily looking at the doctor who delivered her in Brazil goes viral on Facebook

New born babies usually arrive screaming and wailing, but not this newborn girl, who is not having any of it.

Instead, she appeared to angrily stare at the obstetrician who delivered her via Caesarean section.

The photo, which became instant social media hit, was taken at a hospital in Rio de Janeiro, Brazil, by snapper, Rodrigo Kunstmann, who said that childbirth is a unique moment that deserves to be captured.

The parents if the newborn babygirl, Daiane and Renato Pereira da Rocha, said that they had not planned on having a baby, but discovered the pregnancy after five weeks.

And shortly after the discovery, Daiane found out that she had a subchorionic hematoma, an accumulation of blood between the placenta and the uterus, and was at risk of losing her baby.

Fortunately, the mother went on to have a ‘peaceful pregnancy’ and Daiane said Rodrigo’s picture captured Isabela’s determined personality.

“She always wrinkles her forehead when changing diapers and nursing. Isabela was supposed to be born on the 20th, but she chose her day which is already showing her personality.”

When Rodrigo shared the image on his Facebook page, it went viral with more than 4,000 likes and hundreds of comments from amused fans from across the world.

Many Facebook users commented on what could have been on Isabella’s mind while looking at the obstetrician who delivered her.

One user said, what she meant by that look was, “So Trump’s still in office, huh?”

Another quipped, “Baby look like she is annoyed, as she was enjoying being where she was. Cute. Great picture.

A third person joked: “This is a baby who knows how messed up the world really is.”

Speaking to Brazilian publication, Crescer, Rodrigo said, “She opened her eyes wide and didn’t cry; she made a ‘sulky’ face, her mother gave a kiss and it was only after they cut the umbilical cord that she started to cry.

“When I posted it, I thought it would have the potential to become a meme, but it’s always a matter of luck.”