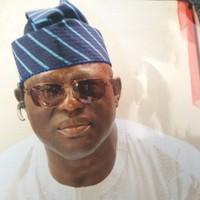 Facebook
Twitter
Pinterest
WhatsApp
Email
‎By Adeniyi Adedeji, Ilorin
The Oyo State Comptroller of Prisons (Correctional Service Center),  Bamidele Ademola, has been remanded in prison custody, in Ilorin Kwara State.
Ademola had been on bail over a N25 million fraud he was allegedly accused of, had his bailed revoked by an Ilorin Upper Area Court, which had granted him bail earlier, and ordered that he be remanded in Ilorin Prinsons.
The Comptroller had been accused of allegedly defrauding one Dele Adeleke of Afon Close, Sabo-Oke, Ilorin, to the tune of N25 million in a land deal, which led to his arraignment in court.
Ademola had enjoyed bail granted by the court, but failed to reach some settlement with the plaintiff, a development which led to presiding judge to revoke his bail and order his bein remanded in prison custody on Monday.
At the court proceedings, the judge had queried the defendant, asking why he failed to appear at the last scheduled hearing. Responding, Ademola had claimed that he had attempted to make payment to the plaintiff and had gone to the bank to make such transfer.
He said, “But unfortunately for me, the bank said that I could not make such transfer for that day since I had exceeded the limit of the amount of money that can be transferred.
“When I heard this, I didn’t know what happened to me. I just woke up three days later in the hospital.”
The judge, Sunday Adeniyi, however brushed aside the excuse of the defendant and reprimanded him, saying, “We are here to do serious business;” and went ahead to give an order revoking the bail earlier enjoyed by the comptroller.
It was gathered that the prison chief had previously been remanded at the Correctional Service Centre, but was released when he paid less than a million as part of the said money he vowed to the plaintiff.
The plaintiff had complained that he paid a cumulative sum of N25 million for the purchase of a landed property, situated at Ipaye Street, Off Onikanga Road, GRA, Ilorin.
The payments were said to be made in tranches into the Fidelity Bank account of Ademola and that the last deposit was done on 29th January, 2019, the complainant added, stressing that it was one Mr Popoola Gabriel, who initially had interest in acquiring the property that introduced the complainant to the defendant.
Popoola had paid the sum of N1.4 million into the Comptroller’s account and he had promised to refund the money, the charge sheet revealed.
It was stated further that Ademola agreed to hand over the property to the complainant on 10th February, 2019 but failed to either do so or refund the money paid into his account.
Efforts geared towards recovering the property from the defendant was said to have proved abortive, despite the intervention of personalities from Omu-Aran, in Irepodun Local Government Area of the state.

Why We Back Sanwo-Olu On Okada Ban -Movement