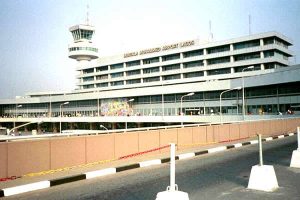 A total of 7,319,118 passengers passed through the Murtala Mohammed International Airport, MMIA, Ikeja  in 2019; while cargo movement was 187,494.34 kilogramme during the same period.
In 2018, the same airport recorded a total of 6,862, 125 passengers with percentage increase of 6.66; while aircraft movement increased by 5.20 percent from 91, 621 in 2018 to 96,373 in 2019.
Cargo movement also recorded an increase.
Disclosing these figures at her office at the MMIA in Ikeja, the manager South West Airports of the Federal Airport Authority of Nigeria, FAAN, Mrs Victoria Shin Aba, said the airport has continued to record tremendous improvement with ongoing constructions work.
She explained that apart from the security issues witnessed last year, which were being addressed by the government, safety issues will continue to be given priority; adding that all shortcomings were being studied with a view to adjusting them.
Ms Shin Aba explained that lessons had been learned from last year’s security challenges adding, that measures taken to address lapses include increase in patrol on air side, with military men being drafted to areas where intruders were using and raising the height of the perimeter fence.
On the new terminal building under construction, the MMIA manager explained that the terminal, when fully operational, will provide seamless passenger facilitation, even as she assured that a total refurbishment of the over 40 years old MMA terminals will then commence.
Shin Aba noted that the old terminal was over stretched, saying that it was built to accommodate 2 million passengers, but ended up taking 7 million.
She said, “A total refurbishment will be carried out at old terminal because it is over 40 years old and it’s structure does not conform with the security on ground today”.