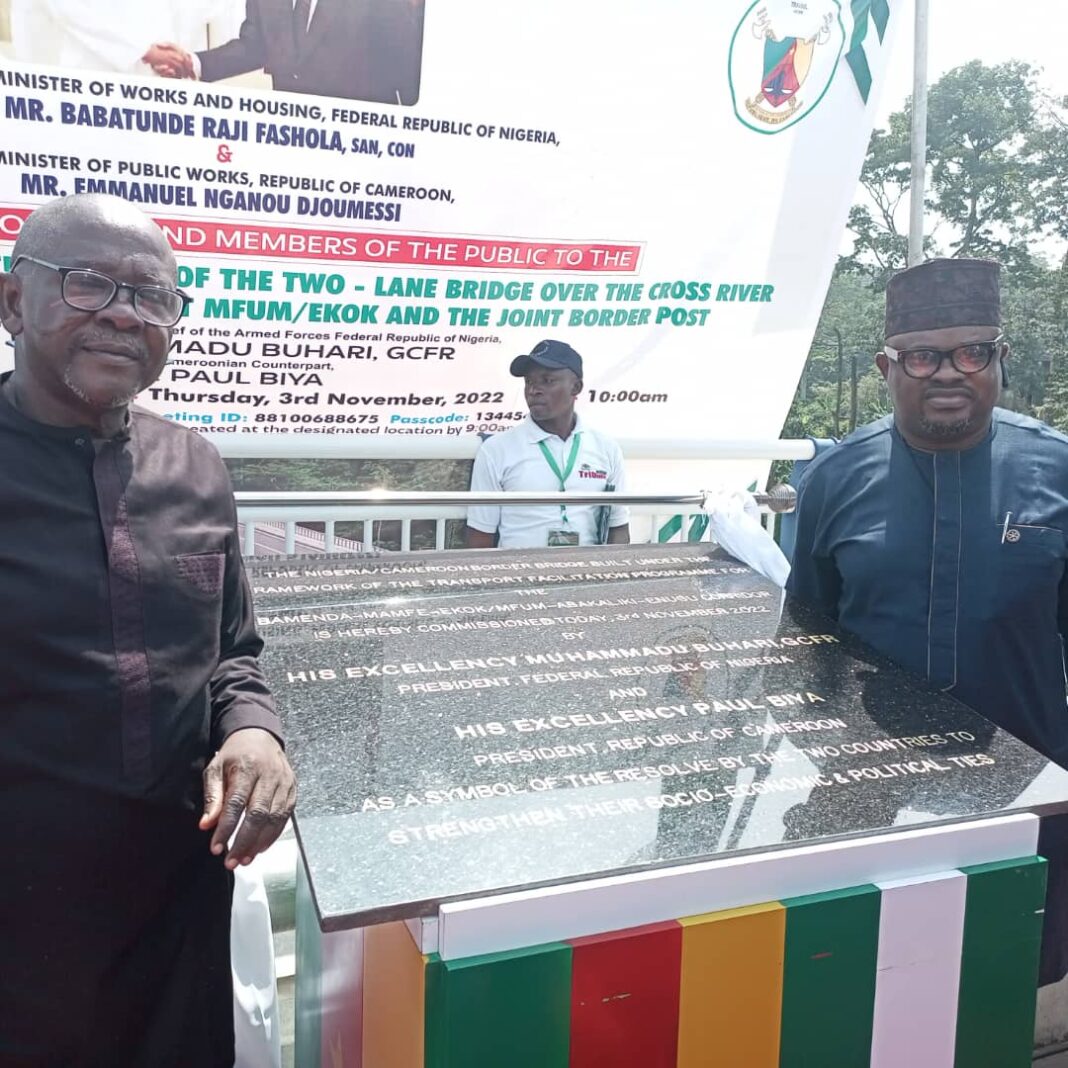 The Vice President, Business Development, Ikom Chambers of Commerce, Mr. Kelly Ayamba, has said that the Mfum-Ekok border bridge, between Nigeria and Cameroon, will increase trading activities, strengthen cooperation between Nigeria and Cameroon and in the Economic Community of West African States, ECOWAS, and the Economic Community of Central African States, ECCAS.

He added that it would not only facilitate trade between Cameroon and Nigeria, but also facilitates trade with other countries in the African continent.

Ayamba, who spoke alongside the Deputy President of Ikom Chamber of Commerce, Industry, Mines and Agriculture and former National President of Cocoa Assocation of Nigeria, CAN, Mr. Sayina Riman, as representatives of West Africa Association Cross-Border Trade in Agro-Pastoral, Fisheries Products and Food, WACTAF, called for the constitution of a machinery to be put in place, so that infrastructure at the beautiful edifice can be properly monitored to elongate the life span of the bridge.

Speaking with journalists in Calabar yesterday, days after President Muhammadu Buhari and his cameroon counterpart, Paul Biya, jointly commissioned the bridge at Mfum Ekok border, Cross River State, the duo charged the Presidents of the two nations to put their hands on deck and ensure that they fashion out ways to elongate the life span of the bridge, so that trading activity in the region can be sustained.

Enumerating the impact of the newly inaugurated 1.5-kilometre bridge, Ayamba, who was also former Commissioner for Finance in Cross River State, stressed that the 1.5-kilometre Mfum-Ekok border bridge, trade between Nigeria and the Republic of Cameroon will be facilitated.

He added that citizens of both countries stand a chance of benefitting maximally from the development.

He said, “As an organisation, we are excited to be part of this event, and we are happy over the inauguration.”

He also lauded the stakeholders of both nations, who made the dream to be actualized with regards to the multi-million dollar Mfum-Ekok border bridge project.

He charged stakeholders of both countries, Nigeria and the Cameroon, to use the bridge peacefully to facilitate their businesses and improve economies of their countries.

He said, “With the bridge, there’ll be increase in trade, by road and strengthening of cooperation between Nigeria and Cameroon, and other countries of ECOWAS and those of ECCAS zone.”

He maintained that the initiative can only be actualized through improving the efficiency of the logistics chain of transport by removing the traffic and non-traffic barriers along Enugu-Bameda corridor.

He enthused, “Reduction in travel hours between Enugu and Bamenda in the Cameroon from 10 hours to 5 hours now that the project had been completed and reduction in the fare by at least 40 per cent.”