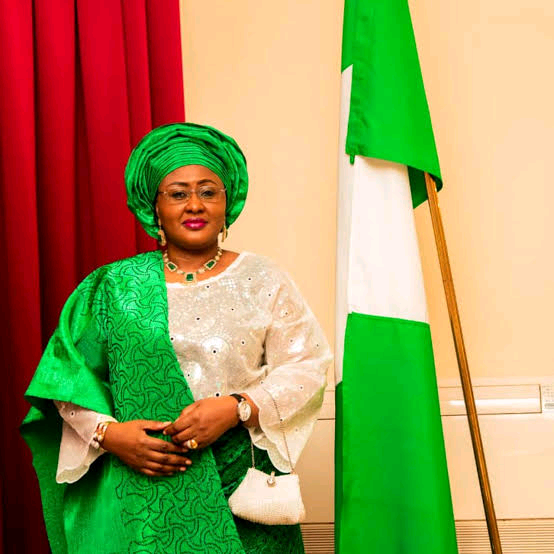 With gratitude to God for a vacation well spent, I, Babatunde Odesola, Esq., heartily rejoice on the safe return of the First Lady, Hajiya Aisha Buhari, to Nigeria, after spending 4,380 hours in the cozy United Arab Emirates city called Dubai, away from the kiss and cuddle of her aged husband, Major General Muhammadu Buhari (rtd.), and the scrutiny of his ineffective security forces.

Hajiya, I love you. Many people don’t know what we share. They don’t know we were both born on February 17. I’ve sorely missed your dazzling beauty in the last six months that you left the warmth of your husband’s bedroom, to enjoy the breathtaking wonder of the 9.7-million-population UAE, a country 11 years younger and 12 times smaller than the giANT of Africa, breathless in the fist of your old sweetheart, Pa Buhari.

Going by the stunning beauties of their wives and rumoured concubines, Nigerian Heads of State between 1960 and 1999 appeared more adept at capturing the hearts of beauty queens than providing solutions to the problems of the country.

From General Johnson Aguiyi-Ironsi to General Yakubu Gowon, as well as General Murtala Mohammed, to General Olusegun Obasanjo and the bloody General Ibrahim Babangida, along with the roguish General Sani Abacha, and General Abdulsalami Abubakar, Nigerians can’t forget the vivacious appeal of Victoria Aguiyi-Ironsi; the wowing beauty of Victoria Gowon; the angelic grace of Ajoke Mohammed; the eyeful chicness of Stella Obasanjo; the shapely charm of Mariam Babangida; the exotic elegance of Maryam Abacha; and the brainy goddess, Lami, whom General Abdulsalami Abubakar hypnotized for a wife.

Hajiya Aisha, your beauty is smashing! I really don’t know how these generals swing it, but I’ve truly never seen a general with an ugly wife.

The alluring belle from the popular Majekodunmi family in Ogun, Omolola, belongs to the Okuku General, Olagunsoye Oyinlola, just as Ronke Ayuba, the adorable TV star, was general Tanko Ayuba’s. These generals! They just know how to cock their love guns at ladies’ hearts, aim and pull the triggers.

Tell me, irresistible Aisha, how did the old Katsina general ‘toast’ and capture the love of an extraordinary beauty like you, at just 18, despite the 28 years age difference between both of you? Is he the lion and you, the jewel?

Hajiya Aisha, I welcome you back to the hell you left since last September, after the life-threatening shooting that occurred in your Aso Rock abode, upon your insistence that an untouchable aide of your husband comply with COVID-19 protocols.

Permit me to ask, madam, have your security guards, whose arrest you protested online after their shooting combat with presidential bodyguards, been released? Your husband’s mouthpiece, Shehu Garba, promised that the shooting would be investigated. Like every one of the electoral promises made by your husband, however, the outcome of the Garba-promised investigation will never see the light of the day, I’m sure.

Lady Buhari, I believe you’ll agree with me that if you, of all people, could be so trampled on in your husband’s administration, the brutal killing of scores of innocent #EndSARS protesters at the Lekki toll gate by soldiers, last October, attests to the fascist in your husband.

Remember, Hajiya, you stridently raised the alarm some years ago that your husband had been held captive by some unknown forces. You insisted that he was no longer in charge of his government.

Madam Buhari, except maybe his cows, your husband had never been in charge of anything – not even in his famed military days, when General Tunde Idiagbon took charge and he, Buhari, took the glory.

When your husband went to sleep after fulfilling his chronic ambition of becoming a civilian President, his Chief of Staff, Abba Kyari, saw his abandoned presidential shoes, dusted and stepped into them snuggly, taking full responsibility of governance.

After Kyari’s death, the shoes were, again, empty, and bandit politicians, killer-herdsmen, Boko Haram, brigands and sycophants have taken turns to wear them, spinning the country madly out of orbit towards hell, as various miscued criminals now unleash anarchy on the land, while your ‘mai gida’ remains cool, calm and collected like a motionless crocodile.

My dear hajiya, your husband has failed Nigeria woefully! Out of tune with reality, your presidential husband always avoids the Nigerian press, but his countless embarrassing mistakes in public have necessitated concerned citizens to patriotically ask for his medical evaluation.

My First Lady, Nigeria’s situation has worsened since you escaped to the Arabian sanity. Now that you’re back into the lawless country your husband heads, I must warn you that Nigeria’s decline into depravity is now full-blown.

Please, Aisha, don’t get into any argument with any security guard as you did last year. A human head now costs N8,000 in Nigeria. If you’re lucky and timely, you can even get one for free among unclaimed corpses left to decay along Nigeria’s highways.

Life is worthless in the land ruled by your husband, Aisha. Scores of innocent people are now being killed, kidnapped and broken daily across the country, much more than the victims of war in Libya, Sudan, Somalia and Congo.

I love you Hajiya Aisha, but I don’t love your husband, because he’s an outstanding blunder. I love you, because you occasionally speak up whenever your space is threatened. Some may say that’s selfish of you – that you need to always speak up against the vipers of injustice brooded by your husband’s administration. They say, “What is sauce for the goose is sauce for the gander.” Well, I won’t criticise their opinion.

Aisha nee Halilu, do you know that the UAE, like Nigeria, was built with oil money? But the UAE has long left Nigeria behind by diversifying their economy from oil dependency, launching it on science-tech-tourism superhighway. The picture of a rain-beaten church rat placed beside an elephant looms large on the horizon whenever Nigeria is compared to UAE.

The wife of my President, the only difference between Nigeria and UAE is leadership, which your husband has tragically failed to give.

Nigeria, presided over by your thick-skinned husband, is the strangest country in the world. It’s a place where anyone can disappear without trace. Imagine, a whole you was out of circulation for six months, and there was no explanation from your husband, his friends, relatives and megaphones.

Everybody just carried on as if you don’t matter. Aisha, between you and me, I even think they were happy you were nowhere around to squeal on their incompetencies and stagnant governance.

During your undisclosed absence, my First Lady, so much water passed under the bridge. African Giant, Burna Boy and Ojuelegba crooner, Wizkid, won Grammy awards. I know your husband sees Nigerian youths as a population of lazybones. I think he’s likely to prefer Dan Maraya Jos music to the music by lazy youths. I was, however, shocked to read a prompt congratulatory message from your husband, extolling the virtues of Burna Boy and Wizkid.

Well, I know that the only arm of your husband’s government that’s effective is the ‘Public Service Announcement Department’ that sends out congratulations at the speed of light but sleeps when hundreds of schoolchildren are kidnapped and snores when Fulani herdsmen and Boko Haram kill for fun.

When EIGHT persons were killed in suspected anti-Asian shooting in Atlanta, Georgia, last week, President Joe Biden and his deputy, Kamala Harris, flew into Atlanta from Washington DC to commiserate with bereaved families.

Over a 100 people have died in various breaches of security across the country this year alone, but our President sits tight in Aso Rock, either unmoved or unaware.

Aisha, the masses that prayed for the enthronement of your husband as President are now praying to God to break the country and his government. It’s sad, your husband has failed.

•Odesola writes from the United States of America and can be reached at: Email: tundeodes2003@yahoo.com; Facebook: @tunde odesola; Twitter: @tunde_odesola