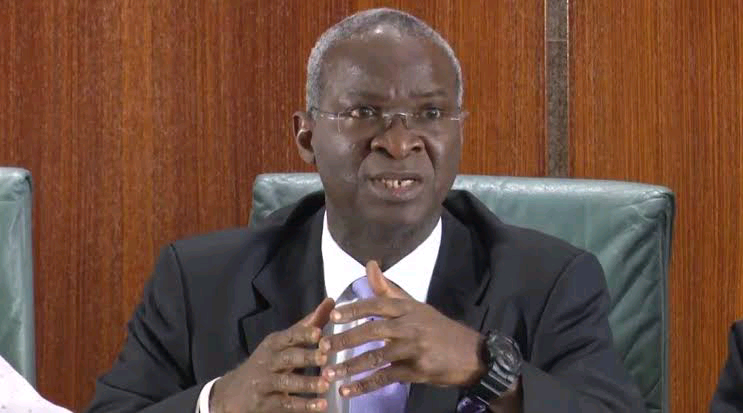 A Lagos-based rights group, Epe Youth Forum, EYF, has described the advice from the Minister of Works and Housing, Mr. Babatunde Raji Fashola, SAN, to contractors handling the reconstruction of the Lagos-Ibadan Expressway over the gridlock on that route that causes untold hardship to motorists and other road users

as sign of sensitivity to the welfare of the citizens.

Recall that the minister, having realized the suffering of the people along the road occasioned by the construction works going on, the minister had appealed to the contractors to fashion out a way to make thoroughfare more convenient and less tedious.

Leader of the EYF, Ogbeni Adewale Oladipupo, who commended the minister over the development during a chat with selected journalists at his office in Epe, Lagos, said, “Fashola has behaved to type of the person we know him to be.”

He pointed out that the former governor of Lagos State has always been humane, respectful and humble.

Oladipupo added that “that conduct of Fashola is never a surprise to some of us who know him as a workaholic and brilliant,” pointing out that “he is so brilliant so much that he has severally won the periodic dignity assessment of the Campaign for Dignity in Governance, CDG, under the able leadership of renowned activist and public analyst, Comrade Razaq Olokoba.”

Against this backdrop, Oladipupo, therefore, urged other government functionaries to imbibe the culture of humility, responsiveness to the plight of the people and hard work, like Fashola, just as he also called on the public using the road not to abuse the window of comfort provided for them by Fashola, reminding that cooperation with the workers on that road would be in the interest of all and sundry.

He averred that Fashola is aware of the role of good road network in the economic growth and financial development of individuals and the nation, asserting that “Fashola, in his characteristic manner, dislikes time wasting and indolence, because of the negative effect it could cause personal and national economy.”

Concluding, Ogbeni Adewale Oladipupo seized the opportunity of the media parley to restate the need to cooperate and support the kinister so as to encourage him to be more focused in the onerous task of building the nation through infrastructure development.