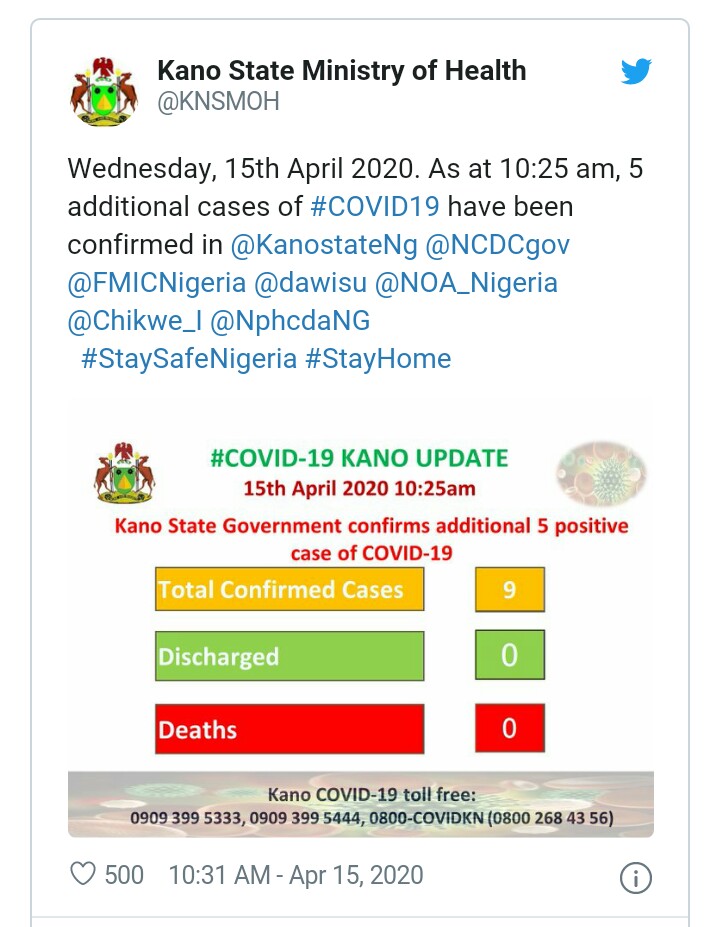 Five news cases of COVID-19 has been announced in Kano State, thus bringing the total tally of cases in the state to 9.

This was made public by the Kano State Ministry of Health, via its official Twitter handle.

Earlier, the Kano State government had earlier announced a total lockdown in the state effective from Thursday, April 16, 2020.

Governor Abdullahi Ganduje made the announcement shortly after confirming the fourth case of COVID-19 in the state.

According to the governor, the lockdown will last for a week and within that period, all markets, mosques, churches are to remain closed.

He said, “From Thursday 16th April by 10 pm Kano is locked down for the benefit of all in the state. All markets are closed and all public gatherings are banned.

“The lockdown is for seven days. We then wait and see what will come up. We are hoping that Allah will see us through.”

Governor Ganduje took the decision based on the recommendations of the Kano State Task Force on COVID-19.

The recommendations were presented to the governor by the Sub-Committee Secretary, Dr Ibrahim Mai Bushira, after meetings between the chairman of the task force, Kano State Deputy Governor, Dr Nasiru Yusu Gawuna, with clerics and other stakeholders.

He explained that the state government would do everything possible to trace the contacts of the index case within the seven-day period.