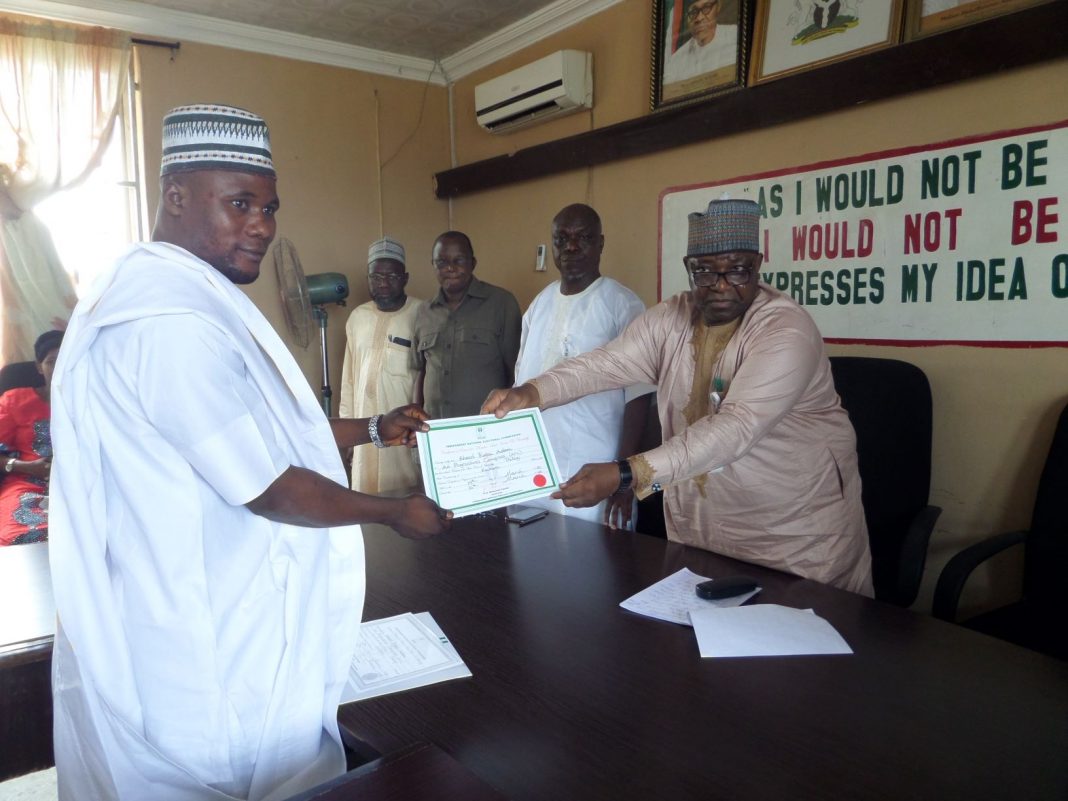 Facebook
Twitter
Pinterest
WhatsApp
Email
By Wole Adedeji, Ilorin
The Independent National Electoral Commission, INEC, has presented the Certificate of Return, CoR, to the winner of the bye-election conducted to fill the vacant Patigi state constituency, Ahmed Rufai Adam.
The lawmaker-elect, Adam, received his CoR from the INEC Resident Electoral Commissioner in the Kwara State, Mallam Garba Attahiru-Madami on Tuesday.
Adam of the All Progressives Congress, APC, won the bye-election conducted on March 14, polling more than 10,000 votes to beat his closest rival, the Peoples Democratic Party, PDP, candidate.
Speaking at the occasion, the Resident Electoral Commissioner commended the six political parties that took part in the by-election for their peaceful conduct and good sense of sportsmanship.
Explaining the delay in presenting the Certificate of Return, the REC said INEC national chairman had shortly after the election suspended all activities in the Commission, adding that that was why the exercise was even attended by few people.
He praised political parties in the state, adding that they have been very wonderful and fully cooperating well with INEC in Kwara, right from 2019 general election.
He however appealed to the leadership of political parties in Kwara State to always live and relate peacefully with one another, saying, “Let us continue to live at peace with one another, let us continue to conduct elections peacefully in Kwara.”
The REC expressed his satisfaction with the overall conduct of the Patigi bye-election, which he said his colleague in Osun State attested to and charged the member-elect to discharge his parliamentary functions with good sense of duty.
Responding, the state vice chairman of the APC, Chief Theophilus Oyebiyi, thanked the
REC for a job well done as regards the Patigi by-election, saying, “I have always been saying it that you are a trusted person with impeccable integrity.  You have not disappointed us.”

What Did Magodo Brooks Do Wrong?