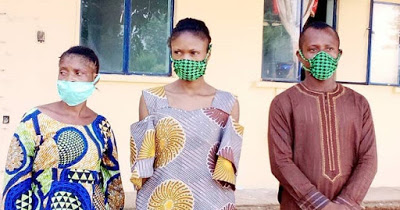 A frustrated 24-year-old former school teacher who resorted to faking her own kidnap for survival, has been arrested by the police in Ilorin, Kwara State.

The female school teacher, Medinat Ibrahim, who is also a half orphan was arrested alongside her elder sister, Amudalat Wahab, as well as Hamned Lekan, her childhood friend, who she co-opted into the fake-kidnap plan.

Parading the three of them at the Police headquarters in Ilorin, the Command’s Public Relations Officer, PPRO, Ajayi Okasanni, told journalists that one Nuruden Solagberu of Oko Olowo area in the metropolis, called Police Energency phone line on January 2nd that a case of kidnap had taken place in the area.

Solagberu was said to have dropped the information that Medinat, who lived at Ile Olude, Oke-Fomo area of Ilorin was kidnapped by unknown persons, which prompted the police to make the informant to make a formal report at Oloje Police Station.

He said Police in the course of the investigation uncovered that a GTB Bank account number 0116404467 belonging to one Hammed Lekan, ‘m’ was used to cash the ransom of Two Hundred and Fifty Thousand Naira from the father of Medinat Ibrahim.

However, while fielding questions from journalists, it became an emotion laden chat, which made even journalists to fight back tears, because of the ugly situation that forced the poor lady to engage in the act.

According to her, her mother died some years ago, and her life became miserable from the moment her father brought in a new wife; her step-mother.

She said she grew up to cater for herself up to training herself in school to the level of sponsoring herself to the Muyideen College of Education, Ilorin, where she obtained National Certificate in Education, NCE.

She said she also struggled to get herself a teaching job in a private school on a salary of N16,000 per month, until the Corona Virus pandemic last year, which made her salaries and that of others to stop.

Her story got worse, according to her, when Corona Virus came at a time when she already had collected money from a co-operative society, where she saved part of her salaries to do a business which turn out to collapse and she ended up bit by bit spending the money to survive for no other source of income.

However, things got awry when pressures were mounted on her to refund the money and there was no one to turn to. Her father was not interested in her pathetic situation, she explained amidst hysterics crying.

Both Hemned Lekan and Hamdalat Wahab said they were not told the details by Medinat, but because they were aware of her plight, they obliged her the assistance she requested, which is that a brother was sending her money from Ago Are, their native home in Oyo State.

They both said only N100,000 was transferred to Lekan’s account as ransom by Medinat’s father to secure her release.

Police said investigation was still ongoing in the matter.