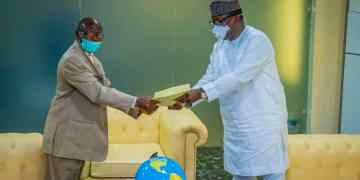 In a letter he personally handed over to the retired Federal Road Safety Corps, FRSC, commander, Fayemi, while commending his uprightness and adherence to safety measures to combat the spread of COVID-19, said Adeoye was apointed for his integrity and exemplary show of valour in the ongoing fight against the pandemic.

Fayemi also made the retired FRSC officer a member of the state’s COVID-19 Task Force.

Adeoye had shot into limelight when a video of him insisting that his son, who returned to Ekiti State from Lagos State, despite being advised to remain where he was, be isolated for 14 days as stipulated by the Nigeria Center for Disease Control, NCDC, guidelines for preventing community spread of COVID-19, went viral.

He maintained and insisted in the video that his son will not follow him home until he has been quarantined at the state’s isolation center.

Fayemi, who received Adeoye in his office on Thursday commended him for his patriotism and selflessness.

At the presentation of a commendation letter to Adeoye, Fayemi, while eulogising the retired FRSC officer said his action was the hallmark of Ekiti values, which the administration is promoting.

While urging Ekiti people to emulate Adeoye’s selfless attitude by promptly reporting anyone who entered the state by any means possible to the appropriate authority, Fayemi said Adeoye’s son would be released to him after the 14-day stipulated quarantine.

He said the major solution to the COVID-19 pandemic is prevention through social distancing and strict observance of hygienic procedures recommended by NCDC and health officials.

He said, “Anyone who has not been resident in Ekiti in the period that this disease has inflicted Nigeria should stay wherever they are. Even if you are Ekiti person and decide to come to Ekiti, you should be ready to be quarantined for 14 days.

“We see that you adhered to this strictly. You have demonstrated the values for which we were known for and you also demonstrated that integrity and your good name are far more important than any other thing and that is why you have to be accorded a responsibility. I hope you will accept to be a COVID-19 Response Ambassador in our state and a member of the COVID-19 Task Force.

“We don’t know how many lives you have saved by this singular action, because we don’t even know your son’s status yet but we pray that nothing happens to him and even if it turns out that way, he would still be safe.”

Part of the commendation letter presented to Adeoye by Fayemi reads: “I am pleased to let you know that the state is very proud of your conduct which elevated the collective wellbeing of the state above your undeniable love for your dear son.

“In accordance to existing regulations, denying your son entry into your household, having travelled from places under federal lockdown against your fatherly advice, you have proved to be a worthy ambassador of our collective resolve to end this pandemic.

“Our government and the good people of Ekiti State are very proud of this chivalrous act of courage and principle which are the hallmarks of the Ekiti person. You represent the kind of self-discipline, selflessness and sense of collective responsibility that our state and our nation need desperately today to progress.

“Indeed, the state will, in future recognize your valour as an example of the rebirth of Ekiti values orientation which is the central focus of this administration.

“For now, we would be most delighted if you consent to being accorded the role of COVID-19 response ambassador in Ekiti State, helping to propagate the message as a member of COVID-19 Task Force in the state.”

Responding, Adeoye expressed his appreciation to the state government and to the governor for recognizing his little contribution towards the drive to end the pandemic in the country.

He said people should not see him as a wicked father, but someone who believed that the nation is greater than an individual, adding that he did what he did for the collective good of all.

While accepting the letter, the new ambassador noted that Fayemi had been receiving a lot of commendations for the proactive manner he had been working to curtail the pandemic in the state. He added that his action was his own little way of supporting the government’s efforts.