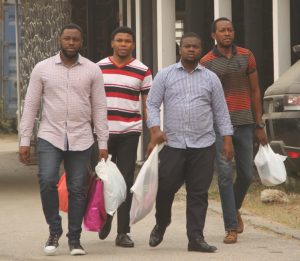 One of the counts reads, “That you, Richard Ironbar Edemdem, Samuel Okpapi, Nelson Ojovbo, Bamigbade Olushola and ISD Technology Ltd and one Shola (still at large), sometime in 2017, in Lagos, within the jurisdiction of this honourable court, conspired among yourselves to commit felony to wit: tampering with critical mobile telecommunications network system and thereby committed an offence contrary to Sections 27 (1)(b) and 10 of the Cybercrimes (Prohibition, Prevention etc) Act, 2015 and punishable under the same section of the Act.”

The defendants pleaded not guilty to the charge and this prompted the prosecution counsel, A. B. C.Oziokor, to ask the court for a trial date and pray that the defendants be remanded in the custody of Nigerian Correctional Services.

Justice Liman, after listening to all parties, adjourned the case till February 19, for hearing of the bail applications and March 4 and 11, 2020 for commencement of trial.

He ordered the defendants to be remanded in the custody of Nigeria Correctional Services pending the determination of their bail applications.