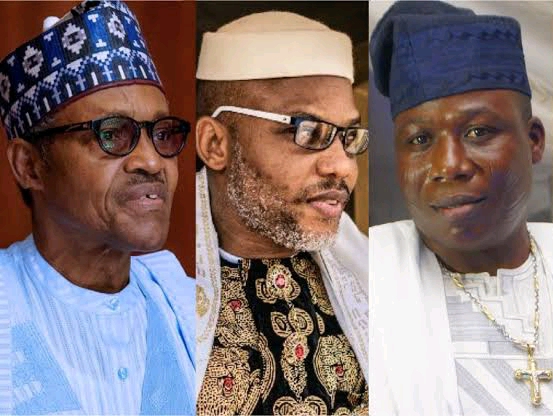 Any day, a cow (bull) in a china shop is a recipe for disaster. Anyway, it’s also a metaphor for Nigeria.

Anywhere, a cow never frolics in a china shop, except in a great-little country like ours, Nigeria, where it lounges in a china shop; lolling its big horns, swaying its brisk tail and clattering its rugged hooves to the noise of crashing china while the President of the shop watches in sadistic silence.
Anytime, the mother cow and its male, the bull, should be in a ranch, mooing and munching mounds of hay, living each day in contented confinement, happy that they have everything – fodder, fun and fur – long before the stainless knife comes along to close their eyes in death. The cattle are unlike the average Nigerian, who’s bereft of everything: hope, dignity and prosperity, except the skin on his body.

It’s animal cruelty to lead wretched cows, bulls and their innocent calves over 1,000 kilometres along the forests, on foot, from Daura through Ilorin to Ore, Sapele, Afikpo, Opobo – in an age-long practice – demeaning in nature and tragic in logic.

It’s sheer stupidity for a government to insist on establishing grazing routes for nomads in the 21st Century, when a country like the US has over 31 million beef cows in cattle farms and ranches, spread across its 50 states. Why are President Buhari and his Fulani caste afraid of ranching? I do not know.

Though cattle can see. Sadly, they can’t talk. They can see the ill-treatment nomads mete out to them, making them trek in sun and rain, day and night – in pregnancy, infancy, sickness and old age.

If only cattle could talk, they would say, “Moo, Mr Foolish, you don’t need to trek uncountable miles in the wilderness to raise beef. The more you make us trek, the more weight we lose, the more our meat loses nutrients, and the more susceptible we are to diseases, sicknesses and death.

“Moo, Mr Foolish. You’ll make much more money, create more jobs and mitigate the effects of climate change if nomads buy and own lands across the country to ranch. Making us eat farmers’ crops is being kobo-wise, naira-foolish; because hardship and inflation accompany famine, always. Huffing over a particular terrain over time, our hooves destroy the architecture of the soil, causing erosion to set in, and engendering environmental degradation.

“Moo, Mr Foolish, meat production has never caused the violent break-up of any country. Nigeria must not be the first. None nomads in the society don’t have to sing panegyrics to cows in order to live and farm on their ancestral lands or eat meat.”

If only cattle could speak. But Nigeria’s President, Major General Muhammadu Buhari (retd.), can speak. And, on July 1, 2021, he spoke to some Nigerians resisting to bow down and worship cattle – in ‘the language they understand.’.

In a midnight operation on July 1, the Buhari regime bared its fangs by sending an amalgamation of Nigeria’s security forces to the Soka residence of Yoruba self-determination activist, Chief Sunday Igboho, in Ibadan, Oyo State, where they killed two innocent Nigerians, carted away JUST seven rifles, ammunition and personal charms in a raid the Department of State Services, DSS, said was to uncover arms stockpile. Seven rifles, in the eyes of the Buhari regime, amounted to a stockpile of arms.

Whether or not they believe in Judgment Day comeuppance, the blood of the two men murdered in Igboho’s residence, Saheed Adisa and one Alfa, is on the hands of President Buhari and his deputy, Prof Yemi Osinbajo.

Why did I say so? Igboho was never invited by the Buhari-Osinbajo-led fascist regime for questioning. He never turned down any invitation from security agencies. Why then did Buhari-Osinbajo send killer goons to attack the residence of Igboho, shattering the peace of his law-abiding neighbours. Some residents of the neighbourhood, especially children and the aged, may never get over the tragic experience for which the regime will never apologise.

Igboho said about N2 million in his wardrobe developed wings during the attack by the Buhari-Osinbajo killer squad, which also announced that 5,000 rounds of ammunition were found in Igboho’s house, an allegation the Modakeke-born activist had denied, saying the guns and ammunition purportedly found in house were planted there.

When US Special Forces attacked the Abbottabad residence of the late world’s foremost terrorist, Osam bin Laden, in Pakistan, on May 2, 2011, American soldiers on the mission recorded every minute of the discreet operation, part of which was later televised.

I’m still baffled as to why the killers sent to Igboho’s house didn’t wear body cams, and if they did, why has the Buhari-Osinbajo regime not released the videos for the world to see that Igboho truly stockpiled arms and ammunition?

If Igboho killed the intruders sent to his house by Buhari-Osinbajo on July 1, 2021, he would have won in court and be awarded a hefty sum in damages in case the incident happened in a right-thinking nation.

The destruction and seizure of the CCTV cameras in Igboho’s residence, and the riddling of his exotic cars with bullets were enough evidence that show that the Buhari-Osinbajo regime had lost the legitimacy to adjudicate on the killings of farmers by Fulani herders.

If President Buhari and VP Osinbajo are not convinced about the inappropriateness of the attack on Igboho, a simple search on Google would show tonnes of videos recorded at Nigerian police stations during public parades of army-uniform-wearing criminal suspects that attacked innocent citizens’ houses.

Is Igboho, therefore, guilty if he opens fire on suspected marauders who invaded his house in the middle of the night, more so, when his house had been attacked and set ablaze by ‘unknown gunmen’ earlier this year?

The barbaric manner of the murderous attack on Igboho’s residence gives vent to the suspicion in public circles that government security agencies were also responsible for the earlier attack on another residence of Igboho, also located in Ibadan.

It also exposes the hypocrisy in the Buhari misgovernment, which has never reprimanded killer Fulani herdsmen, not to talk of apprehending them.

The Minister of Information and Culture, Alhaji Lai Mohammed, while reacting to the arrest of the leader of the Indigenous Peoples of Biafra, IPOB, Mazi Nnamdi Kanu, said Kanu ‘lived a five-star life across several countries, travelling on chartered private jets, living in luxury apartments and turning out in designer shoes and clothes. Of course, as we all saw, he was wearing an attire made by Fendi, a luxury Italian fashion brand, when he was arrested.’ How lower can a government descend and trivialise issues bothering on national security, rule of law, self-determinism and individual rights?
I abhor violence, and do not support some of the methods adopted by IPOB in their operations, but the Buhari regime’s silence on Fulani killings and marginalisation of the Igbo are some of the reasons that sustained the heroics of Kanu.

In the eyes of the Nigerian Constitution, which General Buhari and law professor, Osinbajo, swore to uphold, Kanu is deemed innocent until the allegations against him were proved in court.

If the Buhari-Osinbajo rulership is keeping Kanu on the pretext of ‘Doctrine of Necessity’, he should not be denied access to his lawyers. Abi, for how long would the government try to keep the details of Kanu’s kidnap in a yet-to-be-disclosed country?

Since his arrest about two weeks ago, he had been denied access to his lawyers and relatives – this is not in accordance with global best practices.

It’s easier to comment on Igboho, who had spoken since he went underground, because some facts about the invasion of his house are now in the public domain.

The same thing cannot be said of Kanu, who’s held incommunicado by a government whose body language forebodes intolerance and victimisation.

Kanu must not die in Buhari’s custody.

•Odesola, a journalist and public analysts, writes from the United States of America and can be reached via: Email: tundeodes2003@yahoo.com; Facebook: @tunde odesola; and
Twitter: @tunde_odesola