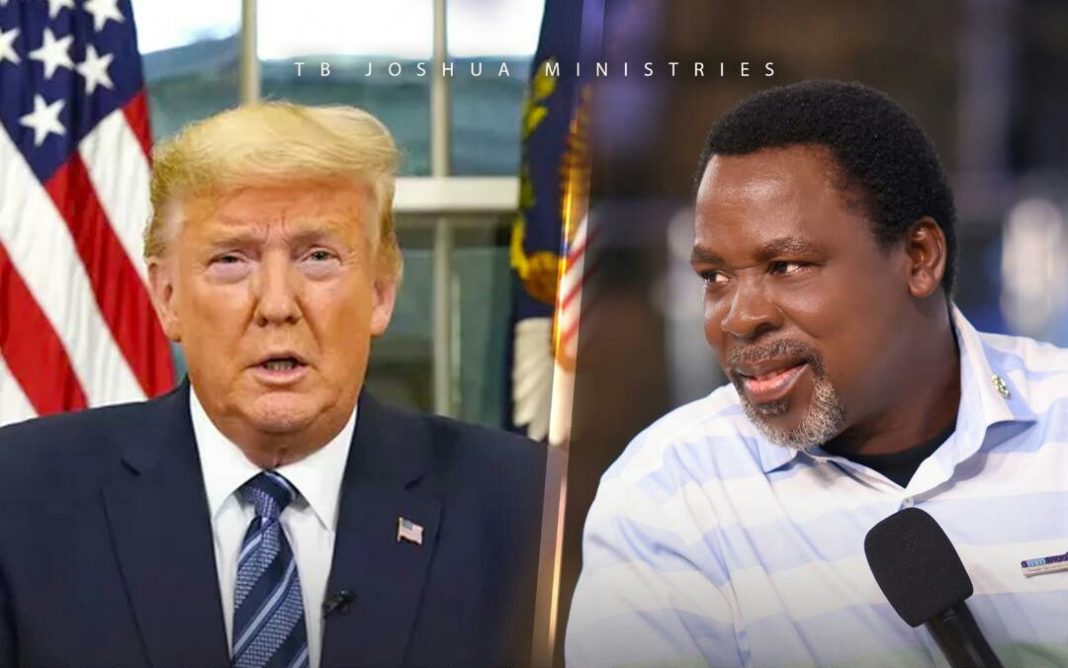 The General Overseer of the Synagogue Church of All Nations, SCOAN, Prophet T.B. Joshua has warned that the US President Donald Trump’s announcement of a travel ban on visitors from European countries to America over the Coronavirus outbreak, would be counter productive.

In an official message to the President of the United States, POTUS, Trump, Prophet Joshua said, “This travel ban on flights from Europe will cause a backlash.
“It will affect not only the American economy the more, but also the world economy. It will also affect the forthcoming election in America – in one way or another.
“The travel ban is not the best way to stop the spread of Coronavirus. The initial measures America put in place are the best way – they just need to be reinforced.”

Recall that in his prophecies for 2019, Prophet Joshua had made certain predictions about 2020, which had come to pass.

Among them was the advent of Coronavirus, which he described in the prophecy as “many sicknesses and diseases that leaders have been treating privately” and which he said will surface this year.”

The US National Security Adviser, Robert O’Brien, disclosed that China had had Coronavirus for several months and had been treating it silently.

He said, “Unfortunately, rather than using best practices, this outbreak in Wuhan was covered up…This probably cost the world community two months to respond.”
And today, like the man of God predicted, it has surfaced!

Prophet Joshua had also said in the 2020 prophecies, “This year will be a year of humility. This year, the Lord will humble us with our challenges. Challenges can be affliction, disease, sickness etc.

“To humble us with these is for those things to destroy us or expose us. Let us move closer to God.”

Already, the outbreak of the virus, which the World Health Organisation, WHO, has declared as an epidemic, is affecting greatly affecting the American and global economy.

He also predicted that many would be bedridden and would not survive the impending sickness or disease; over 4,960 people had died of Coronavirus, with 132,431 people already inflicted.

The man of God had also predicted and said, “Pray for unity and understanding among the British Royal Family, because of what I am seeing.”

And few days later, Prince Harry announced that he was stepping down from his duties in the Royal Family.
In the message to Trump, Pastor Joshua said, “Coronavirus is fear and fear lingers in the air. Fear does not need to fly to America or any other country on a plane before being contracted.”

He however concluded the message with cheery news, signalling the end of Coronavirus, saying, “In conclusion, we are on our knees praying. The noise of coronavirus will be silenced before the end of this month, March 2020.”