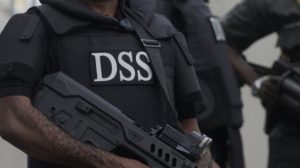 The Department of Security Services, DSS, on Wednesday could not continue with the prosecution of the alleged mastermind of a fake video purporting President Muhammadu Buhari’s marriage to the Minister of Humanitarian Affairs, Disaster Management and Social Development, Sadiya Faruq.
Recall that the DSS had arraigned one Mohammed Kabiru before a Kano State Magistrate’s Court for concocting a video in which he alleged that Faruq was getting married to President Buhari.
When the matter came for hearing on Wednesday, the prosecution counsel, Ishaya B. Bulus, prayed an adjournment, adding that the case diary is to be sent the office of Kano State Attorney-General and Commissioner for Justice for legal advice.
Bulus further told the court that everything required of the DSS to secure legal advice from Kano State Ministry of Justice is being done.
Counsel to the defendant, Ali A. Jamilu, who did not oppose the request for an adjournment, however prayed the court for a variation of his client’s bail conditions.

Jamilu informed the court that one of the conditions of his client’s bail was the directive that he reports to the DSS everyday; he therefore appealed for the review of the stringent condition.
In his ruling, Magistrate Aminu Gabari granted the request made by the defendant through his counsel, and directed the defendant to report to the DSS weekly.
Magistrate Gabari thereafter adjourned the case till March 24, for hearing.