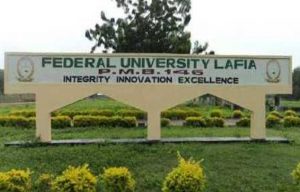 Three best first class graduates of the Federal University, Lafia, FULA, were at the weekend offered automatic employment by the BUA Group of Companies.

Chief Executive of the BUA Group, Alhaji Ishaka Rabiu, offered the automatic employment to the three best first class graduates during the second combined convocation of the university in Lafia, the Nasarawa State capital.

The three best first class graduates offered automatic employment by the BUA Group were: Nicholas Suleiman Tanko; a graduate of chemistry, Muslihu-Deen Suleiman; a graduate of Physics and John Alo; graduate of Economics.

Alhaji Rabiu, who was one of the awardees of a honorary doctorate degree at the convocation, was represented at the event by the governor of Nasarawa State, Abdullahi Sule.

Explaining that the automatic emoloyment of the three best first class graduates was a reward for hard work, the BUA Chief Executive also pledged to execute any project of the university that is worth N100 million.

Governor Sule also announced that the Nasarawa State government on its part, has appreciated some selected best graduating students in all the academic years with the sum of N500,000 each.

Similarly, Governor Sule also announced the offer of automatic appointment of the best three graduates who are indigenes of the state as pioneer staff of Azman Rice Farms Limited in Toto Local Government Area of the state.

Earlier, the Vice Chancellor of the university, Professor Muhammad Sanusi Liman, said the convocation was the first time in four years, with a total number of 1,447 graduates out of which 29 bagged first class degrees from different faculties.

While appreciating the Nasarawa State government for the tremendous support the university had received from it, especially from the immediate past governor of the state, Senator Umaru Tanko Al- Makura, Liman urged the incumbent governor, Sule, to maintain the relationship.