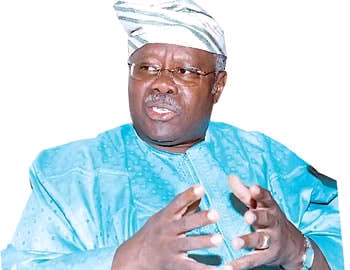 Former Deputy National Chairman of the Peoples Democratic Party, PDP, Chief Olabode George, has passionately appealed to President Muhammadu Buhari to provide leadership and bring Nigerians together, noting that the seemingly intractable clashes between herdsmen and farmers across the nation, which are more pronounced in the South West, can only be stopped with the outright banning of open grazing.

Speaking at a press conference in Lagos on Wednesday, titled: ‘We Must Withdraw From The Brink, George maintained that the free-grazing of cows in South West forests, farms and cities was wrong, archaic and not palatable for the economy itself.

The Atona Oodua of Yorubaland said, “This is the time that President Muhammadu Buhari should demonstrate a rallying unifying leadership to bring all our people together. Surely, this is not the time for ethnic or sectarian jingoism. This is the time for healing. This is the time to mend the broken places and rectify the pervasive wrongs. Our people have been living together in peace and harmony for more than one hundred years, even before the colonialists imposed the rule of the gunpowder.”

The former military governor of old Ondo State said that he was not speaking as a politician, but as a patriotic Nigerian, pointing out that the country must return to the path of peace.

George maintained, “The widening spread of banditry, the reckless shedding of innocent blood, the bitter murderous clashes between farmers and herdsmen, the loose brigandry – have virtually made all corners of our society insecure, vulnerable to the rule of the cudgel and machete.

“Governance everywhere is fast losing its grip on the first principles of protecting lives and properties. From Sokoto to Lagos, from Ebonyi to Borno, from Katsina to Ogun and from the Savanah to the rain forest, lives are daily cut down, without the culprits being brought to pay for their crimes. Road users are kidnapped, brutalized, exposed to unimaginable kinds of cruelty and then forced to pay the ransom.”

Insisting that the way out was a restructured Nigeria, the PDP leader stressed that he strongly believes that before the country can heal from its present wounds and rectify the observable aberrations, the country must address the apparent glaring imbalances.

He added, “We must restructure the Nigerian entity to ensure its survival as a nation. There are so many aberrations thwarting equitable governance in our country. The centre is too encumbered with many responsibilities. It is overburdened, stressed with unnecessary functions, that ought to be devolved to the states.

“Our federation is only a federation in name. It is more of a unitary system, barking out Command and Control like a military hierarchy.”

Meanwhile the Atona Oodua of Yorubaland said that the panel set up by the Lagos State government to look into the #EndSARS tragedy of October last year had demonstrated an unconscionable totality in the inexplicable, hurried, greedy, selfish, inhumane, outrageous and immoral decision to re-open the Lekki Toll Gates, while the blood of the Lekki martyrs were still crying out for justice.

He said, “The treatment of peaceful protesters, who were humiliated, bundled into the hot oven of the Black Maria amid the searing heat last Saturday at Lekki Toll Gate does not enhance the critical ingredients of democracy, wherein citizens are guaranteed the right to protest peacefully against the obvious wrongs of power. This strong arm tactic does not make us look good in the eyes of the enlightened world.”

The former chairman of the board of the Nigerian Ports Authority averred that in a more enlightened clime, government should dismantle the two parallel intra state toll gates and erect a permanent monument to honor those who lost their lives at that #EndSARS rally.

He insisted, “There is no where in the world where you have two parallel toll gates on intra-state roads. As a matter of fact, the toll gates are responsible for the severe traffic gridlocks endangering the health of Lekki residents and causing unreasonable economic hardship.”

George also demanded that the Lagos State government, by the enablement of the Freedom of Information Act, must publish the names of those who are managing the toll gates, adding, “We do remember however, that there was a buy-back several years ago returning the control and ownership of the Admiralty Toll gate to the Lagos State government. The Lekki-Ikoyi Toll gate was built from scratch with tax payers money.”

Kwara Reverses Conversion Of Dispensary To PDP Secretariat By Saraki