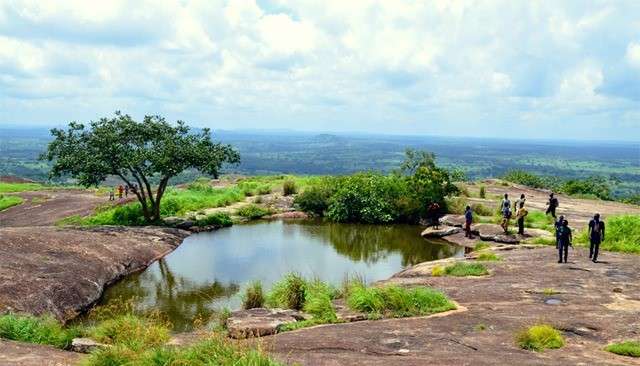 The traditional ruler of the ancient town of Ado-Awaye, in Oyo State, Oba (Rev.) Ademola Olugbile Folakanmi, has said that the only natural suspended lake in the world, which is situated in the town, has the potential to generate 50 per cent of the state’s Internally Generated Revenue, IGR, if well developed.

The monarch, who is the head of Ado-Awaye Tourism Heritage Development, said that if the artificial suspended lake in Colorado, USA, could generate 50 per cent of the Gross Domestic Product, GDP, of Colorado, then the only natural suspended lake in the world, located in Ado-Awaye in Iseyin Local Government Area of Oyo State, can generate more than 50 per cent of Oyo State’s GDP.

Ado-Awaye’s natural suspended lake remains the only one in the world, while a hanging lake in the U.S. state of Colorado is said to be an artificial one, located in Glenwood Canyon, about seven miles East of Glenwood Springs.

He disclosed that the maiden edition of the Iyake Festival is set to debut from the 7th to 11th December, 2021, while the test run will take place from April 2nd to 5th, 2021 both in Ado-Awaye land.

While calling on government at all levels as well as private sectors for support, the monarch listed the key objectives of the festival to include: promotion of the cultural heritage, of not only of Oyo State and Nigeria, but within the African continent in general.

He said, “The Iyake Festival promises to be a foremost tourism brand in Oyo State that we all will be proud of in years to come. We therefore crave the indulgence of each and everyone of you to rally round this project not just by giving it your support, but also by opening your business networks within corporate Nigeria and beyond to aid in the marketing initiatives of this brand.”

The CEO, Red Alert Consult Limited, which is partnering Ado-Awaye Tourism Heritage Development Initiative, Sir Babatunde Obalana, said the natural lake is the engine room to catapult the economic potentials of the community into one of humongous development to transform and showcase to the world, the God-given natural breathtaking attractions that abound in Ado-Awaye, Oyo State and Nigeria as a whole.