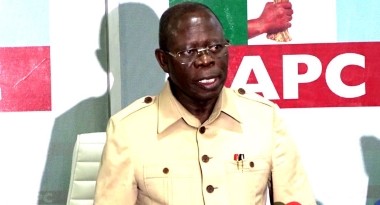 Academics, lawyers and politicians have been assembled by the All Progressives Congress, APC, to screen all aspirants for the Edo State governorship, including the incumbent governor of the state ahead of its primary election slated for June 22.

The party said that this development was meant to check the repeat of the Bayelsa State experience, hence the need to assemble credible persons for the screening exercise.

Revealing this at the party’s national secretariat in Abuja, while inaugurating the screening committee, the APC National Chairman, Comrade Adams Oshiomhole, wondered why the APC deputy governorship candidate for Bayelsa State would be disqualified after haven been sworn-in as a seating senator at the National Assembly.

Oshiomhole also said that the Bayelsa experience was in part responsible for the display of aspirants credentials at the national secretariat under the tag of “claims and objection,” charging the committee to be thorough in their duties.

He said, “After intensive consultations, we decided to have people who in our own judgement are sound and when they go through this process, their recommendations will be very helpful. Under our rules, we are expected to set up a screening committee before every election.

“In the past, we have always performed this role but maybe we did not give it the appropriate weight. Maybe we had assumed that people who want to aspire to certain offices particularly high elective offices of executive governor, we expect that no one will submit documents contain information that may possibly lead to disqualification. In the past, this was more of a formality but with what happened to us in Bayelsa state earlier this year, we decided to approach the issue of screening much more seriously than ever before.”

Speaking on what the role of the NWC will be at the end of the screening exercise if there are discrepancies, Comrade Oshiomhole said, “NWC can reject the screening result. The screening committee is the High Court; the Appeal Committee, the Appeal Court and the NWC, the Supreme Court.”