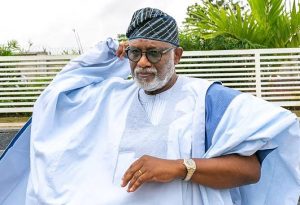 The Senior Special Assistant on Media and Publicity to Governor Rotimi Akeredolu of Ondo State, Ojo Oyewamide, has described as “highly pedestrian and juvenile,” the perception being created by the opposition Peoples Democratic Party, PDP, in the state that Akeredolu was deeply involved in the primary election of the ruling All Progressives Congress, APC, to pick candidates for the forthcoming local government election across the state and especially in Owo Local Government.

Drawing the attention of the Ondo people to the mischief being plotted by the opposition PDP in the aftermath of the APC local government primaries, Oyewamide said that the opposition party
has mindlessly hatched a media spin to depict an imaginary picture of the use of Operation Amotekun by Arakunrin Akeredolu to scuttle the exercise in Owo Local Government Area in particular.

Oyewamide said of the plot, “This is most unfortunate and paints, in clear terms, the PDP in the most unserious and intellectually immobile manner as a political party. The PDP is very unkind to itself to allude to the use of the Operation Amotekun that has yet to take off. This is lazy opposition at work again.

“It is pertinent to reiterate that Governor Akeredolu had, weeks before the exercise, pointedly told the APC stakeholders that he would neither impose nor interfere in the process that was intended to produce candidates for the forthcoming local government election in the State.”

The SSA, therefore advised the opposition party to be responsible in opposition instead of being mischievous and economical with the truth most times.

Africa’s Future, Too Vital To Be Left To AU Alone -Labour Institute DG